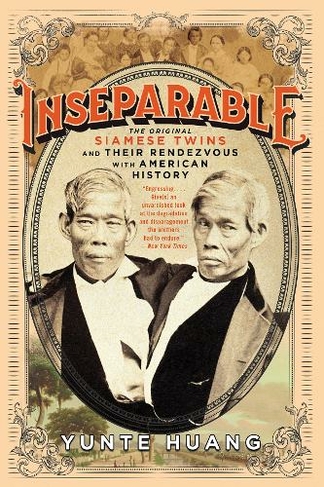 Inseparable: The Original Siamese Twins and Their Rendezvous with American History

Twins Chang and Eng Bunker (1811-1874), conjoined at the sternum by a band of cartilage and a fused liver, were "discovered" in Siam by a British merchant in 1824. Yunte Huang depicts the twins, arriving in Boston in 1829, first as museum exhibits but later as financially savvy showmen. Their rise from freak-show celebrities to rich southern gentry; their marriage to two white sisters, resulting in twenty-one children; and their owning of slaves is here not just another sensational biography but an excavation of America's historical penchant for finding feast in the abnormal, for tyrannising the "other"-a tradition that, as Huang reveals, becomes inseparable from American history itself. 28 illustrations

Yunte Huang is a Guggenheim Fellow and a professor of English at the University of California, Santa Barbara. He is the author of Transpacific Imaginations and Charlie Chan, which won the 2011 Edgar Award and was a finalist for the 2010 National Book Critics Circle Award in Biography. Having come of age in China as a student in the time of Tiananmen, Huang now lives in Santa Barbara, California.