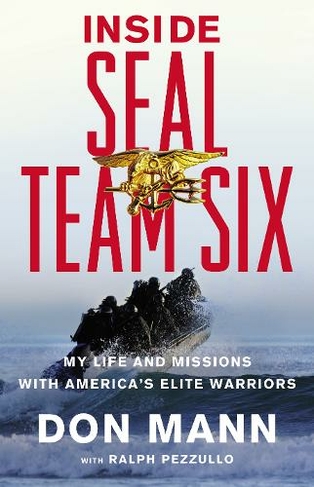 Don Mann offers an indispensable, ground-breaking narrative of what it takes to make a SEAL and to break a man - very close to the same thing. Pushing himself and his men to extremes, Mann suffered intensely for country and here he'll describe his life in the SEALS and SEAL Team 6, his training and the training he conducted and the operations that took him within an inch of his life. This will be the most up-to-date, comprehensive book on SEAL Team 6. There are 6500 Navy SEALS but only a select few reach the most rigorous, effective team of all, so secret that its operations are only beginning to be understood: known as SEAL Team 6, it's one of the United States's two secretive Tier One counter-terrorism and Special Missions Units; the other such group is 1st SFOD-D (Delta Force). SEAL Team 6 trains and operates over 300 days a year away from home. They have been secretly involved in every major US military operation since their founding in World War II. They are the only unit qualified to operate in all terrains and most recently, they were responsible for the capture and death of Osama Bin Laden. On air, on land, at sea--the SEALS are the dominant, misunderstood, and secrecy-shrouded American special operations unit, and here, they come to vivid life.

Don Mann (CWO3, USN) has for the last thirty years been associated with the Navy SEALS either as a platoon member, assault team member, boat crew leader, or advanced training officer; and more recently program director preparing civilians to go to BUD/s (SEAL Training). Up until 1998 he was on active duty with SEAL Team 6. Since his retirement, he has deployed to the Middle East on numerous occasions in support of the war against terrorism. Many of the active duty SEALs on SEAL Team 6 are the same guys he taught how to shoot, conduct ship and aircraft takedowns, and trained in urban, arctic, desert, and river and jungle warfare, as well as Close Quarters Battle (CQB) and Military Operations in Urban Terrain (MOUT). He has suffered two broken backs, two cases of high altitude pulmonary edema and multiple broken bones, in training or service. He has been captured twice during operations and lived to talk about it.Co-writer Ralph Pezzullo is a New York Times bestselling author and award-winning playwright, screenwriter and journalist. His books include Jawbreaker (with CIA operative Gary Berntsen).