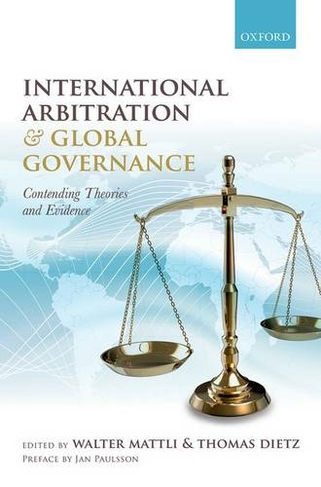 Most literature on international arbitration is practice-oriented, technical, and promotional. It is by arbitrators and largely for arbitrators and their clients. Outside analyses by non-participants are still very rare. This book boldly steps away from this tradition of scholarship to reflect analytically on international arbitration as a form of global governance. It thus contributes to a rapidly growing literature that describes the profound economic, legal, and political transformation in which key governance functions are increasingly exercised by a new constellation that include actors other than national public authorities. The book brings together leading scholars from law and the social sciences to assess and critically reflect on the significance and implications of international arbitration as a new locus of global private authority. The views predictably diverge. Some see the evolution of these private courts positively as a significant element of an emerging transnational private legal system that gradually evolves according to the needs of market actors without much state interference. Others fear that private courts allow transnational actors to circumvent state regulation and create an illegitimate judicial system that is driven by powerful transnational companies at the expense of collective public interests. Still others accept that these contrasting views serve as useful starting points of an analysis but are too simplistic to adequately understand the complex governance structures that international arbitration courts have been developing over the last two decades. In sum, this book offers a wide-ranging and up-to-date analytical overview of arguments in a vigorous nascent interdisciplinary debate about arbitration courts and their exercise of private governance power in the transnational realm. This debate is generating fascinating new insights into such central topics as legitimacy, constitutional order and justice beyond classical nation state institutions.

Walter Mattli joined Oxford University in 2004 and previously taught at Columbia University. He received a Ph.D. from the University of Chicago in 1994. His publications include The Logic of Regional Integration: Europe and Beyond (1999), The Politics of Global Regulation (2009 co-edited with N. Woods), The New Global Rulers: The Privatization of Regulation in the World Economy awarded the 2012 Best Book Award of the International StudiesAssociation (2011, co-authored with T. Buthe), Institutional Choice and Global Commerce (2013, co-authored with J. Jupille & D. Snidal) as well as articles on European legal integration, EU enlargement, comparative regional integration, international commercial dispute resolution, transatlantic regulatory cooperation, andglobalization and international governance. He is Professor of International Political Economy in the Department of Politics and International Relations at Oxford University and Fellow of St. John's College, Oxford.Thomas Dietz has spent two years as postdoctoral researcher at the University of Oxford Law Faculty and Wolfson College. He is Assistant Professor in Politics and Law at the University of Muenster, Germany.