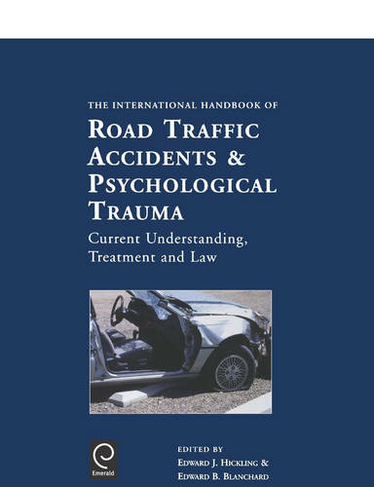 The most common trauma that occurs in western civilization is the road traffic accident. Yet medical, psychological and legal professionals have to date largely ignored this all too common horror. In the fall of 1997, the First International Conference was held that was dedicated exclusively to the psychological impact of road traffic accidents (RTAs). This event brought, for the first time ever, the leading experts from all over the world to share and develop their ideas. This provided the catalyst of ideas and information for this volume. The volume as a result contains some of the most current information available on this topic to date. This book contains comprehensive overviews of the common medical and psychiatric disorders that follow RTAs. The book addresses the major psychological disorders of Post Traumatic Stress Disorder and Acute Stress Disorder, with new data being presented from the leading research centers in the world. Reviews and preliminary data from some of the ongoing controlled clinical treatment trials are shared, as well as how the medical and psychiatric disorders interact with the role of the lawyers and insurers.

Edward J. Hickling received his PsyD in clinical psychology from the University of Denver, School of Professional Psychology in 1982. He is an Assistant Professor in the Department of Health and Rehabilitation Sciences at Russell Sage College in Troy, New York. In addition he has a practice specializing in the treatment of trauma survivors, anxiety and affective disorders, behavioral medicine and psychological assessment. Since 1990 he has been the Co-Principal Investigator on several NIMH grants with Dr. Edward Blanchard. He has published numerous scientific articles and chapters in books. He is the co-author with Dr. Blanchard of the book, "After the Crash: Assessment and Treatment of Motor Vehicle Accident Survivors", published by APA in 1997. His current research interest include the assessment and treatment of PTSD, the detection of malingering in a clinical setting, the psychological impact of physical illnesses, and sports psychology. Dr. Edward B. Blanchard received his doctoral degree in clinical psychology from Stanford University in 1969. After holding faculty positions at the University of Georgia, the University of Mississippi Medical Center, and the University of Tennessee Center for Health Sciences, Dr. Blanchard went to the University at Albany, State University of New York, in 1977 and has remained there ever since. In 1990 Dr. Blanchard was named Distinguished Professor of Psychology by the University at Albany. He is currently Director of the Center for Stress and Anxiety Disorders at the University at Albany. Dr. Blanchard began work on PTSD in collaboration with Larry Kolb, MD, at the Albany veteran's Administration in 1981, focusing primarily on assessment research with Vietnam veterans. In 1990 he began collaborative research on motor vehicle accident survivors with Edward J. Hickling, PsyD. Current research interests include irritable bowel syndrome, psychological treatments for headache, and psychophysiological assessment.