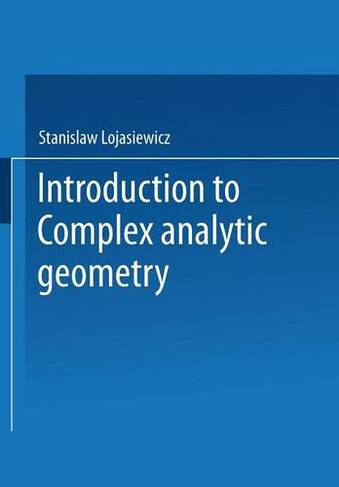 By Stanislaw Lojasiewicz (Author)
Paperback
https://www.whsmith.co.uk/products/introduction-to-complex-analytic-geometry-1991-ed/stanislaw-lojasiewicz/paperback/9783034876193-12-000.html £80.99 rrp £89.99 Save £9.00 (10%)
GBP
Availability
In Stock
With Free Standard Delivery To Your Home Or Store
Details
Spend £25 on eligible products to receive free standard delivery to home or free next working day click and collect to store
Share

facts. An elementary acquaintance with topology, algebra, and analysis (in cluding the notion of a manifold) is sufficient as far as the understanding of this book is concerned. All the necessary properties and theorems have been gathered in the preliminary chapters -either with proofs or with references to standard and elementary textbooks. The first chapter of the book is devoted to a study of the rings Oa of holomorphic functions. The notions of analytic sets and germs are introduced in the second chapter. Its aim is to present elementary properties of these objects, also in connection with ideals of the rings Oa. The case of principal germs (5) and one-dimensional germs (Puiseux theorem, 6) are treated separately. The main step towards understanding of the local structure of analytic sets is Ruckert's descriptive lemma proved in Chapter III. Among its conse quences is the important Hilbert Nullstellensatz (4). In the fourth chapter, a study of local structure (normal triples, 1) is followed by an exposition of the basic properties of analytic sets. The latter includes theorems on the set of singular points, irreducibility, and decom position into irreducible branches (2). The role played by the ring 0 A of an analytic germ is shown (4). Then, the Remmert-Stein theorem on re movable singularities is proved (6). The last part of the chapter deals with analytically constructible sets (7). XIV, 523 p.