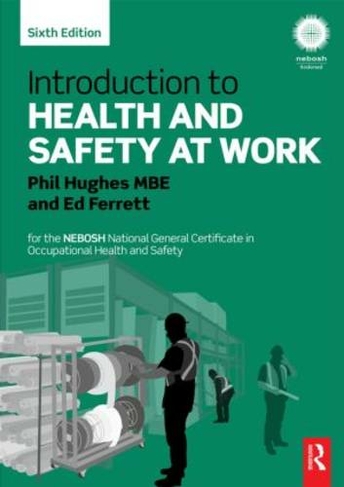 Also available on eBook for £46.79. Click here to purchase from Rakuten Kobo

Introduction to Health and Safety at Work covers the fundamentals of occupational safety and health for the thousands of students who complete the NEBOSH National General Certificate in Occupational Health and Safety each year. Fully revised in alignment with the April 2015 syllabus, this sixth edition provides students with all they need to tackle the course with confidence. The highly illustrated content covers all of the essential elements of health and safety management, the legal framework, risk assessment and control standards and also includes checklists, report forms and record sheets to supplement learning. Aligned to the NEBOSH National General Certificate in Occupational Health and Safety Practice questions and answers to test knowledge and increase understanding Complete with a companion website containing extra resources for tutors and students at www.routledge.com/cw/hughes Written by renowned authors, the Introduction to Health and Safety at Work is also a handy reference for managers and directors dealing with the day-to-day issues of health and safety and is of great value to those studying for level 3 N/SVQ and the NEBOSH National Diploma. 150 Line drawings, color; 2 Line drawings, black and white; 142 Halftones, color; 45 Tables, color; 52 Illustrations, color

Phil Hughes MBE is a well-known UK safety professional with over 40 years worldwide experience as Head of Environment, Health and Safety at two large multinationals: Courtaulds and Fisons. Phil started work in health and safety in the Factory Inspectorate at the Derby District UK in 1969 and moved to Courtaulds in 1974. He joined IOSH in that year and became Chairman of the Midland Branch, then National Treasurer and was President in 1990-1991. Phil has been very active in the NEBOSH Board for over 10 years and served as Chairman from 1995 to 2001. He was also a Professional Member of the American Society of Safety Engineers for many years and has lectured widely throughout the world. Phil received the RoSPA Distinguished Service Award in May 2001 and was a Director and Trustee of RoSPA from 2003-2010. He received an MBE in the New Year Honours List 2005 for services to Health and Safety. Phil is a Chartered Fellow of IOSH.Ed Ferrett is an experienced health and safety consultant who has practised for over 25 years. With a PhD and an Honours Degree in Mechanical Engineering from Nottingham University, Ed spent 30 years in Higher and Further education, retiring as the Head of the Faculty of Technology of Cornwall College in 1993. Since then he has been an independent consultant to several public and private sector organisations including construction businesses, the Regional Health and Safety Adviser for the Government Office (West Midlands), and was Chair of West of Cornwall Primary Care NHS Trust for 6 years until 2006.Ed was a member of the NEBOSH Board from 1995 until 2010 and Vice Chair from 1999 to 2008. He has delivered many health and safety courses and has been a lecturer in NEBOSH courses for various course providers. He has been an External Examiner for an MSc course and BSc course in Health and Safety at two UK Universities, a Reporting Inspector for Independent Further and Higher Education with the British Accreditation Council and a NEBOSH Ambassador. Ed is a Chartered Engineer and a Chartered Member of IOSH.