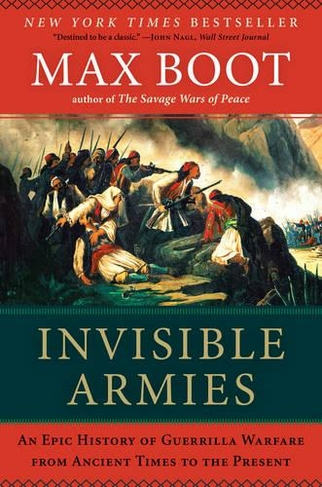 Invisible Armies: An Epic History of Guerrilla Warfare from Ancient Times to the Present

Invisible Armies presents an entirely original narrative of warfare, which demonstrates that, far from the exception, loosely organized partisan or guerrilla warfare has been the dominant form of military conflict throughout history. New York Times best-selling author and military historian Max Boot traces guerrilla warfare and terrorism from antiquity to the present, narrating nearly thirty centuries of unconventional military conflicts. Filled with dramatic analysis of strategy and tactics, as well as many memorable characters-from Italian nationalist Guiseppe Garibaldi to the "Quiet American," Edward Lansdale-Invisible Armies is "as readable as a novel" (Michael Korda, Daily Beast) and "a timely reminder to politicians and generals of the hard-earned lessons of history" (Economist). 70 illustrations; 8 maps

Max Boot is a Senior Fellow at the Council on Foreign Relations, a columnist for the Washington Post, and a global affairs analyst for CNN. His most recent book is the New York Times bestseller The Road Not Taken: Edward Lansdale and the American Tragedy in Vietnam.