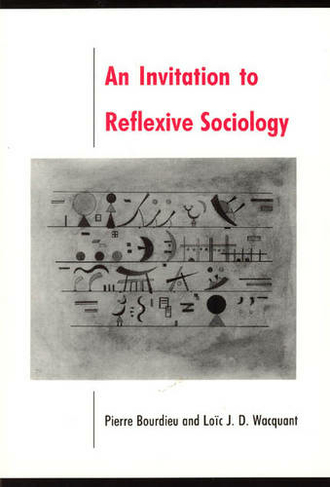 Over the last three decades, the French sociologist Pierre Bourdieu has produced one of the most imaginative and subtle bodies of social theory and research of the post war era. Yet, despite the influence of his work, no single introduction to his wide-ranging "oeuvre" is available. This book, intended for an English-speaking audience, offers a systematic and accessible overview, providing interpretive keys to the internal logic of Bourdieu's work by explicating thematic and methodological principles underlying his work. The structure of Bourdieu's theory of knowledge, practice, and society is first dissected by Loi c Wacquant; he then collaborates with Bourdieu in a dialogue in which they discuss central concepts of Bourdieu's work, confront the main objections and criticisms his work has met, and outline Bourdieu's views of the relation of sociology to philosophy, economics, history, and politics. The final section captures Bourdieu in action in the seminar room as he addresses the topic of how to practice the craft of reflexive sociology. Throughout, they stress Bourdieu's emphasis on reflexivity--his inclusion of a theory of intellectual practice as an integral component of a theory of society--and on method--particularly his manner of posing problems that permits a transfer of knowledge from one area of inquiry into another. Amplified by notes and an extensive bibliography, this synthetic view is essential reading for both students and advanced scholars. Pierre Bourdieu is Professor of Sociology at the Colle ge de France. Loi c J. D. Wacquant is a Junior Fellow, Society of Fellows, Harvard University.

Pierre Bourdieu held the Chair of Sociology at the Coll ge de France, where he directed the Center for European Sociology, the journal Actes de la recherche en sciences sociales, and the publishing house Raisons d'agir Editions until his death in 2002. He is one of the most influential social scientists of the twentieth century as well as a leading public intellectual involved in the global mobilization against neoliberalism. He is the author of numerous classics of sociology and anthropology. Among them are Reproduction in Education, Society, and Culture, Outline of a Theory of Practice, Distinction: A Social Critique of the Judgment of Taste, Homo Academicus, The Rules of Art: Genesis and Structure of the Artistic Field, and Pascalian Meditations.Lo c J. D. Wacquant is professor of sociology at the University of California, Berkeley, and researcher at the Centre de sociologie europ enne, Paris. A MacArthur Foundation Fellow and recipient of the Lewis Coser Award of the American Sociological Association, his interests span urban marginality, embodiment, the penal state, ethnoracial domination, and social theory. His books have been translated in a dozen languages and include Body and Soul: Notebooks of An Apprentice Boxer, The Mystery of Ministry: Pierre Bourdieu and Democratic Politics, Urban Outcasts: A Comparative Sociology of Advanced Marginality, and Punishing the Poor: The Neoliberal Government of Social Insecurity.