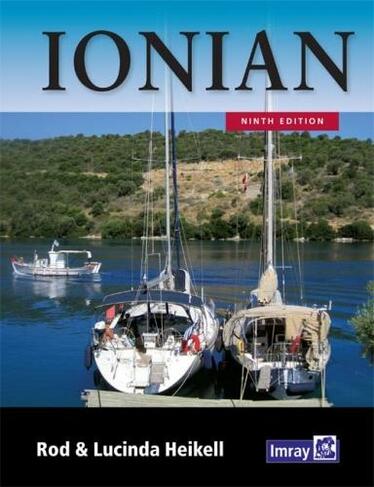 Like its companions, West Aegean and East Aegean, Ionian contains detailed information on many of the smaller harbours and anchorages which cannot be covered as comprehensively in Rod Heikell's major guide, Greek Waters Pilot. These handy cruising companions are ideal for charterers and flotilla sailors who are in the area for a short time but to make the best of it need all the essential background information on places to visit, history, food and travelling in Greece at their fingertips. Cruisers on their own yachts will also find much of interest and additional pilotage when cruising in the area. Ionian covers the coasts and islands south from Corfu, southwards to Finakounda and eastwards to Mesolongion. Ionian is essential on-board reference. This new 9th edition has been revised thoroughly throughout. The authors have updated the text and plans, and added lively new photographs. 'Heikell's style is easy to digest and gives pleasure in the details of the history, geography and social circumstances of the places described as well as the essential sailing information.' The Little Ship 'This book, as well as being a practical manual on Ionian cruising, seems to have absorbed much of the author's personal feelings regarding the charm which draws him back to it, and any reader who has had a whiff of the magic spell of the Greek islands will sense this, and inevitably renew the resolve to return and experience it once again in greater measure.' Nautical Magazine 'Rod Heikell nowadays is to the Mediterranean as gin is to tonic. It is difficult to imagine sailing there without one of his guides. Clear pilot notes, chartlets and plentiful illustrations, with entertaining commentaries on each place. Up-to-date observations on local and national regulations. The new edition does not disappoint. If one must choose, I would have no hesitation in recommending Heikell.' Cruising Association 'Rod has a knack for dropping in snippets of interest and colour to give the reader a feel for the atmosphere of each port or bay.' Yachting Monthly 'Like all Rod Heikell's pilots, it is also a travel guide in its own right.' Ionian Magazine 'The sailing directions are particularly useful when entering the smaller anchorages and harbours, for which little information is to be found on charts, and include excellent harbour plans and top quality aerial photographs.' Flying Fish Magazine (Ocean Cruising Club)

Rod Heikell was born in New Zealand in 1949 and sailed hesitantly around bits of it's coast in a variety of yachts. He tried racing in the Hauraki Gulf but was really not much good at it. In England he abandoned academic life and for no good reason other than curiosity, he bought Roulette, a 1950's plywood JOG yacht nearly 20ft long, and sailed it down to the Mediterranean. He worked on charter here and delivered yachts until, in ignorance of the scale of the task, he set off to write a yachtsman's guide to Greece. This was followed by guides for other countries in the Mediterranean. He has sailed back and forth between England and the Mediterranean including a trip down the Danube and on to Turkey in Rosinante, an 18ft Mirror Offshore. In 1996 he took his fourth yacht, his beloved Tetra, to SE Asia and back for the research for Indian Ocean Cruising Guide. Apart from sailing the 'wrong' way and back again the 'right' way across the Indian Ocean in Tetranora, his beloved 31ft Cheverton New Campaigner, he has done two transatlantics in seven tenths and two transatlantics on Skylax, his present yacht. He has also cruised extensively in other parts of the world on other yachts. Skylax is now back in the Mediterranean after her circumnavigation being readied for new adventures. He always returns to the Mediterranean, his favourite cruising grounds, where with his wife Lu he updates his guides on the area. His latest books are The Trade Wind Foodie and The Accidental Sailor. Some of these books have been translated into French, German, Italian, Spanish, Russian and Turkish. Also edits the Imray-Tetra chart series for the eastern Mediterranean. Articles have appeared in Yachting World, Yachting Monthly, Practical Boat Owner, Sailing Today, Yacht, Sail, and other magazines