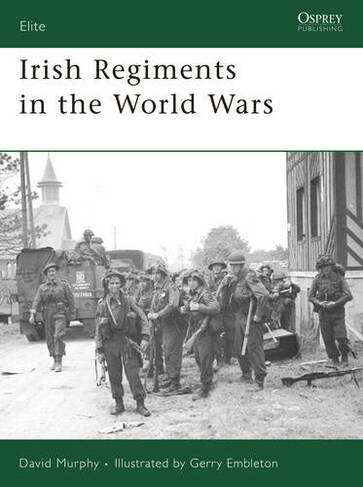 Irish Regiments in the World Wars No. 147

The tens of thousands of Irish soldiers who fought in the British Army in World War I gained a fierce fighting reputation, distinguishing themselves at Ypres, Gallipoli, the Somme, and Palestine. Despite the establishment of the Irish Free State in 1922, Irishmen continued to volunteer for the British Army in World War II. Again their war record was distinguished; units included the famous 38th Irish Brigade who fought in North Africa and Italy, and the Irish Guards who won a total of two Victoria Crosses, 33 Military Crosses and 90 other military medals. Providing the first concise, illustrated history of the Irish Regiments in both World Wars, this book covers their uniforms and insignia, as well as battle histories and proud service records. Illustrations (some col.)

Dr David Murphy - MA, PhD, FRGS, FRAS - is on the staff of the Royal Irish Academy, Dublin and has been commissioned by the Military History Trust of Ireland to write a gazeteer of Irish regiments. He is already the author of The Arctic Fox: A Life of Sir Francis Leopold McClintock, and Ireland and the Crimean War, and has written articles for The Irish Times, An Consantoir: the Irish Defence Journal, and numerous entries for the Dictionary of Irish Biography. The author lives in County Dublin, Ireland.