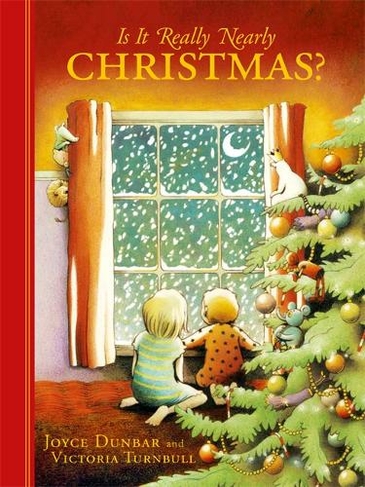 Is it Really Nearly Christmas?

By Joyce Dunbar (Author), Victoria Turnbull (Illustrator)
Hardback
https://www.whsmith.co.uk/products/is-it-really-nearly-christmas/joyce-dunbar/victoria-turnbull/hardback/9781444931723-12-000.html £10.65 rrp £12.99 Save £2.34 (18%)
GBP
Availability
In Stock
Free Delivery Available When You Spend £25 Or More
Details
Spend £25 On Products To Receive Free Standard Delivery To Your Home Or Free Next Working Day Click And Collect To Store
Share

An enchanting Christmas picture book about the magic and anticipation of Christmas Eve. There's only one more sleep till Christmas, and Lucas and Willow, the moon and the stars are all waiting... Waiting for Christmas morning, and presents, and mince pies and fun. But, unbeknown to Lucas and Willow, the magic has already begun. As silently and secretly the toys come to life... Perfect for sharing on Christmas Eve, this atmospheric story will soon become a new festive tradition. Written by master storyteller Joyce Dunbar, with stunning, classic illustrations from award-winning artist Victoria Turnbull.

Joyce Dunbar has published more than 80 books. Translated into 20 languages, she is best known for her lively and quirky picture books stories, with their wide emotional range. She has, as Philippa Pearce once said in a review, 'a passionate authenticity of imagination.' She revels in the joy of language, the playfulness of words, and in seeing her work fabulously brought to life by world class illustrators. She has written many stories for radio and television and contributed to several anthologies. Victoria Turnbull was born in York, and spent her childhood absorbed by books and drawing. She went on to study for an MA in Children's Book Illustration at the Cambridge School of Art and in 2013, won the Association of Illustrators New Talent Award in the Children's Book category. Victoria now lives in London, where she both writes and illustrates her own stories. The Sea Tiger, published by Templar, was her debut picture book.