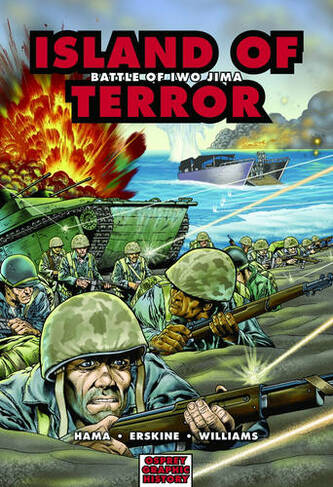 By Gary Erskine (Illustrator), Larry Hama (Author)
Paperback
https://www.whsmith.co.uk/products/island-of-terror-battle-of-iwo-jima-graphic-history-s/gary-erskine/larry-hama/paperback/9781846030550-01-000.html £11.03 rrp £11.99 Save £0.96 (8%)
GBP
Availability
Currently unavailable. We don't know when or if this item will be back in stock
Free Saver Delivery on orders over £20
Details
FREE SHIPPING over £20 for Saver Delivery
Share

The savage battle of Iwo Jima was a costly but essential victory that paved the way for the Allied invasion of Japan. This book vividly recreates the 36 days in 1945 when Marines such as Sgt Darren Cole and 19-year old Private Douglas T. Jacobson displayed untold bravery, fighting seemingly impenetrable defences until the infamous flag could be raised on Monut Suribachi and the Japanese were defeated. Illustrations (chiefly col.)

Larry Hama is best known as a writer and editor for Marvel Comics where he was responsible for creating and writing the G. I. Joe comic book of the 1980s, and developing many of the G.I. Joe characters for Hasbro. His other comic book writing credits include Wolverine, Avengers, Elektra, Venom, and Batman. Larry also created the Bucky O'Hare comic, which was turned into a toy line and an animated TV series. He lives in New York. The author lives in New York, USA.