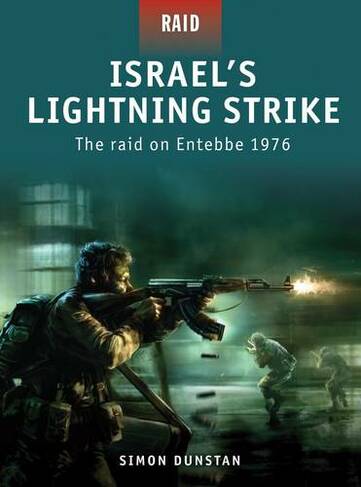 The Israeli Special Forces' operation at Entebbe goes down in history as one of the most audacious counter-terrorist assaults ever conducted. On 27 June 1976, four terrorists - two of the Popular Front for the Liberation of Palestine and two of the German Baader-Meinhof terrorist group - highjacked a passenger jet and forced a landing in Entebbe, Uganda. Here they were met by reinforcements, and - although releasing a few hostages - transferred all the Jewish and Israeli prisoners to the terminal building. As Idi Amin's assistance to the terrorists became increasingly clear, the Israeli government began preparations for a military assault. The element of surprise was crucial; never before had such a large-scale raid at such a long distance been successfully undertaken. This is the incredible story of how the Israeli Special Forces defied radar for over 2,000 miles, masqueraded as a tyrant in a Mercedes and captured uniforms, and defeated an army in brutal combat, in a triumph of sheer audacity and nerve. This is a compelling book chronicling an incredible moment in history. Illustrations (some col.)

Simon Dunstan is a well-established author, film-maker and photographer in the field of military history, with several titles already published with Osprey. His books have covered topics such as helicopter and armored warfare in Vietnam, the Challenger main battle tank, the British Guards and armored warfare in Korea. He also presented the Great Raids series for the History Channel including a production detailing the Entebbe Raid. Simon lives and works in London. The author lives in London, England.