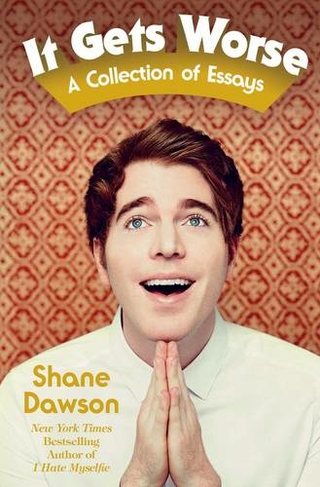 It Gets Worse A Collection of Essays

Bestselling author Shane Dawson returns with another highly entertaining and uproariously funny essay collection, chronicling a mix of real life moments both extraordinary and mortifying, yet always full of heart. Shane Dawson shared some of his best and worst experiences in I Hate Myselfie, the critically acclaimed book that secured his place as a gifted humorist and keen observer of millennial culture. In this new collection of original personal essays, Shane goes even deeper, sharing never-before-revealed stories from his life, giving readers a no-holds-barred look at moments both bizarre and relatable, from cult-like Christian after-school activities, dressing in drag, and losing his virginity, to hiring a psychic, clashes with celebrities, and coming to terms with his bisexuality. Every step of the way, Shane maintains his signature brand of humor, proving that even the toughest breaks can be funny when you learn to laugh at yourself. This is Let's Pretend This Never Happened and Running With Scissors for the millennial generation: an inspiring, intelligent, and brutally honest collection of true stories by a YouTube sensation-turned one of the freshest new voices out there. 16 4-c photos throughout

Shane Dawson is an actor, comedian, musician, and YouTube vlogger. The New York Times dubbed him "YouTube's comic for the under-30 set." He lives in Hollywood, CA. Shane's full-length film directorial debut, "Not Cool," was released in September. Find him on youtube.com/user/ShaneDawsonTV.