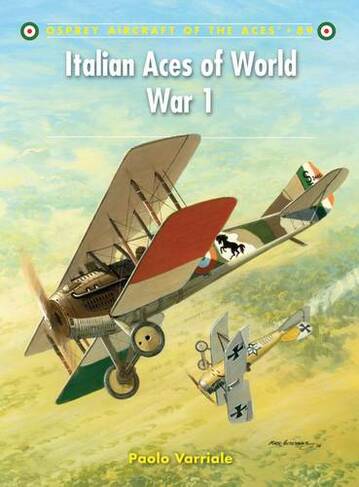 The Italian aces of World War One have gone down in history as the irrefutable masters of the skies in the battle against their Austro-Hungarian enemies. In this often forgotten theatre of warfare these remarkable pilots gave the Italian forces an undisputed air superiority and left an enduring legacy as extraordinary men. Having interviewed the descendants of almost every Italian ace from the Great War, Paolo Varriale uncovers these fighters' incredible and sometimes tragic histories. Years of painstaking research has culminated in this truly groundbreaking study which brings to life the exploits of such famous aces as Baracca, Ruffo and Piccio, and the lesser known Riva, Sabelli and Nardini. Letters, diaries and unpublished photographs shed light on previously unknown personal and unit insignia, exposing many myths and making this a commanding addition to the aviation history of World War One. Illustrations (some col.)

Paolo Varriale is the Curator of the Baracca Museum and a World War 1 consultant to the Italian Air Force Historical Office, which has published his tomes on Italian World War 1 aviation units and aces. A staff writer of the online aerospace journal Dedalo News (www.dedalonews.it), he is widely published in Italian and foreign aviation magazines. A life-long enthusiast of vintage aircraft, he served for many years on the Board of Directors of GAVS (Italian historical aircraft preservation association), and has participated in the restoration of various aircraft.