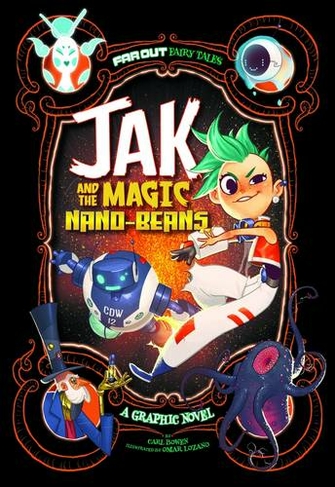 Jak and the Magic Nano-beans A Graphic Novel

Jak and her robotic servant, Cow, are in a pickle; Mom wants Jak to sell Cow for scrap, but Cow and Jak have become best friends. So instead of selling the rusty old robot for spare change, Jak strikes a bargain with the scrap collector: if Jak and Cow can visit the Cloud Kingdom via the Space Elevator and get hold of some magic nano-beans, Jak can keep Cow safe and sound. But what they find in space is anything but safe--and its sounds are far from soothing . . .

Carl Bowen is a father, husband, and writer living in Lawrenceville, Georgia. He has published a handful of novels, short stories, and comics. For Stone Arch Books and Capstone, Carl has retold 20,000 Leagues Under the Sea (by Jules Verne), The Strange Case of Dr. Jekyll and Mr. Hyde (by Robert Louis Stevenson), The Jungle Book (by Rudyard Kipling), "Aladdin and His Wonderful Lamp" (from A Thousand and One Nights), Julius Caesar (by William Shakespeare), and The Murders in the Rue Morgue (by Edgar Allan Poe). Carl's novel, Shadow Squadron: Elite Infantry, earned a starred review from Kirkus Book Reviews. Omar lives in Monterrey, Mexico. He has always been crazy for illustration, constantly on the lookout for awesome things to draw. In his free time, he watches lots of movies, reads fantasy and sci-fi books, and draws! Omar has worked for Marvel, DC, IDW, Capstone and several other publishing companies.