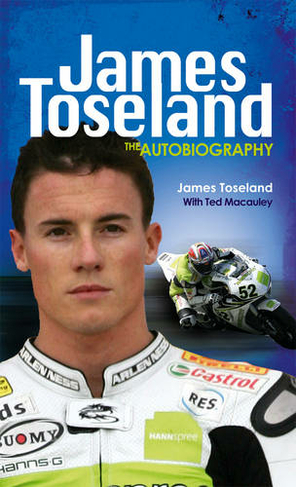 By James Toseland (Author), Ted Macauley (Author)
Paperback
https://www.whsmith.co.uk/products/james-toseland-the-autobiography/james-toseland/ted-macauley/paperback/9780753513330-12-000.html £10.65 rrp £12.99 Save £2.34 (18%)
GBP
Availability
In Stock
Free Delivery Available When You Spend £25 Or More
Details
Spend £25 On Products To Receive Free Standard Delivery To Your Home Or Free Next Working Day Click And Collect To Store

James Toseland, youngest ever World Superbike Champion at just 23 years old, has rocketed into a league of biking legends, following in the footsteps of Carl Fogarty, Troy Bayliss and Neil Hodgson. Toseland's success has been driven by a lifetime of tragedy. Using racing as a release, he became a fearless daredevil and had moved his way up through the ranks of British Superbikes by the time he was sixteen. But there was even more turmoil to come - a career of dramatic crashes and a collision in Monza, Italy, which left James seriously injured and his Honda team-mate dead. Winning his second Superbike championship in 2007, and about to make the move to MotoGP for 2008, James' story is one of genius, tragedy and an overwhelming will to succeed. 1x8 colour illustration section

James Toseland was the youngest person to win a World Superbike Championship at just 23. He won his second chaptionship in 2007, his last Superbike season for Ten Kate Honda before moving into MotoGP in 2008.