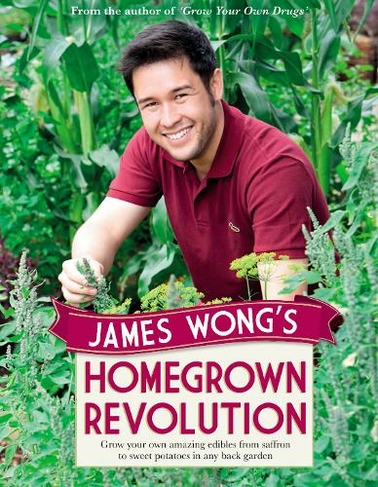 A revolution in the garden - a completely new range of fruit and vegetables to grow and eat. Whether it's a window box of homegrown saffron, your very own kiwi vine or a mini green tea plantation on your patio, TV botanist and best-selling author James Wong proves that 'growing your own' can be so much more exciting than spuds, sprouts and swede. Breaking free from the 'dig for victory' time warp of allotment staples, James reveals the vast array of 21st century crops that will flourish outdoors, even in our blustery North Atlantic climate - no greenhouse necessary. From goji berries to food-mile free sweet potatoes, James' revolutionary approach to edible gardening will show you how to grow, cook and eat all manner of superfood crops that are just as easy (if not easier) and far more exciting to grow than the 'ration book' favourites. Inspiring, fun and full of plant know-how, this book is set to revolutionise the whole concept of 'growing your own' for newbie growers to seasoned allotment veterans alike. You'll never look at your garden the same way again! 80

After winning a scholarship to the university of Bath James went on to train at the Royal Botanical Gardens, Kew, and the University of Kent, gaining a Master of Science degree with distinction in Ethnobotany. At the age of 27, Wong became the presenter of his own award-winning BBC Two television series Grow Your Own Drugs. The series demonstrates a number of natural remedies sourced from plants and became the highest-rated gardening series on UK television. James is also a regular face on the hit BBC One rural affairs series Countryfile since its reformatting in April 2009. In 2008, he was one of the regular presenters on the show Fossil Detectives, which was broadcast initially on BBC Four and then repeated on BBC Two. He has also appeared on BBC's Gardeners' World, Channel 4's Richard & Judy, The Alan Titchmarsh Show on ITV, and on BBC Breakfast. As a garden designer, he has become a four-time Royal Horticultural Society RHS medal winner for gardens at the Chelsea Flower Show and Hampton Court Palace Flower Show. Wong has designed an Ethnobotanical Garden for the University of Kent, where he is a guest lecturer.Visit his website at www.jameswong.co.uk, follow him on Twitter at https://twitter.com/Botanygeek, and join him on Facebook www.facebook.com/pages/James-Wong. You can also watch videos of James on www.youtube.com/user/GrowSuttonsSeeds and follow him on Pinterest here http://pinterest.com/botanygeek/.