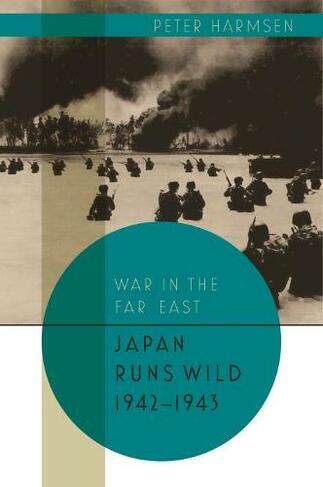 In early 1942, the Japanese Army and Navy were advancing on all fronts, humiliating their US, British and Dutch foes throughout the Asia Pacific. In a matter of just months, the soldiers and sailors of the Rising Sun conquered an area even bigger than Hitler's empire at its largest extent. They seemed invincible. Hawaiians and Australians were fearing a future under Hirohito. For half of mankind, fate was hanging in the balance. Fast forward to the end of 1943, and the tables had been turned entirely. A reinvigorated American-led military machine had kicked into gear, and the Japanese were fighting a defensive battle along a frontline that crossed thousands of miles of land and ocean. Japan Runs Wild, 1942-1943 by acclaimed author Peter Harmsen details the astonishing transformation that took place in that period, setting the Allies on a path to final victory against Japan. This second installment in the trilogy, War in the Far East, picks up the story where first volume Storm Clouds over the Pacific, 1931-1941 left off. The trilogy will give a comprehensive view of World War II in the Asia Pacific, with due emphasis on the central Japanese-American struggle, but also examining the role of the other nations engulfed in the vast showdown: British, Australians, Soviets, Filipinos, Indians and Koreans. Above all, the central importance of China is highlighted in a way that no previous general history of the war against Japan has achieved. 1 plate section

Peter Harmsen, a foreign correspondent in East Asia for two decades, has worked for Bloomberg, the Economist Intelligence Unit, and the Financial Times. A fluent speaker of Mandarin Chinese, Harmsen is also the former bureau chief in Taiwan for French news agency AFP. His book Shanghai 1937: Stalingrad on the Yangtze inspired a US Public Television documentary by three-time Emmy Award winner Bill Einreinhofer, which started airing in the fall of 2018, reaching 80 percent of the American television audience. Harmsen's work has been translated into Chinese, Danish, and Romanian.