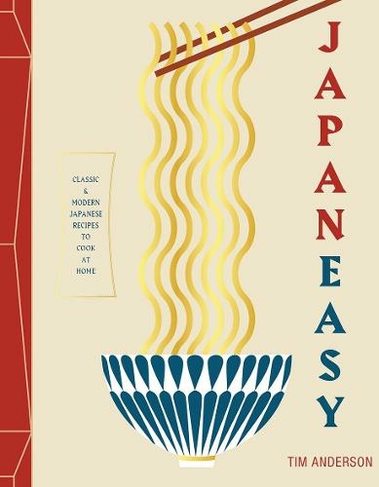 JapanEasy: Classic and Modern Japanese Recipes to Cook at Home

By Tim Anderson (Author)
Hardback
https://www.whsmith.co.uk/products/japaneasy-classic-and-modern-japanese-recipes-to-cook-at-home/tim-anderson/hardback/9781784881146-12-000.html £17.60 rrp £22.00 Save £4.40 (20%)
GBP
Availability
In Stock
Free Delivery Available When You Spend £25 Or More
Details
Spend £25 On Eligible Products To Recieve Free Standard Delivery To You Home Or Free Next Working Day Click And Collect To Store
Share

Many people are intimidated at the idea of cooking Japanese food at home. But in JapanEasy, Tim Anderson reveals that many Japanese recipes require no specialist ingredients at all, and can in fact be whipped up with products found at your local supermarket. In fact, there are only seven essential ingredients required for the whole book: soy sauce, mirin, rice vinegar, dashi, sake, miso and rice. You don't need any special equipment, either. No sushi mat? No problem -- use just cling film and a tea towel! JapanEasy is designed to be an introduction to the world of Japanese cooking via some of its most accessible (but authentic) dishes. The recipes here do not 'cheat' in any way; there are no inadequate substitutions for obscure ingredients: this is the real deal. Tim starts with some basic sauces and marinades that any will easily 'Japanify' any meal, then moves onto favourites such as gyoza, sushi, yakiroti, ramen and tempura, and introduces readers to new dishes they will love. Try your hand at a range of croquettas, sukiyaki and a Japanese 'carbonara' that will change your life. Recipes are clearly explained and rated according to difficulty, making them easy to follow and even easier to get right. If you are looking for fun, simple, relatively quick yet delicious Japanese dishes that you can actually make on a regular basis - the search stops here. Full colour throughout

Tim Anderson is a chef, food writer, and MasterChef champion. Born and raised in Wisconsin, Tim studied Japanese food culture at university and lived in Japan for two years. After moving to London, he won MasterChef in 2011, which catapulted him into a position as one of the UK's most prominent voices on Japanese food, American food, and craft beer. He has operated the pop-up Japanese restaurant Nanban since 2013, which has inspired a book, Nanban: Japanese Soul Food. Tim's restaurant of the same name, opened in the heart of Brixton at the end of 2015, and has been widely supported by critics and customers alike.