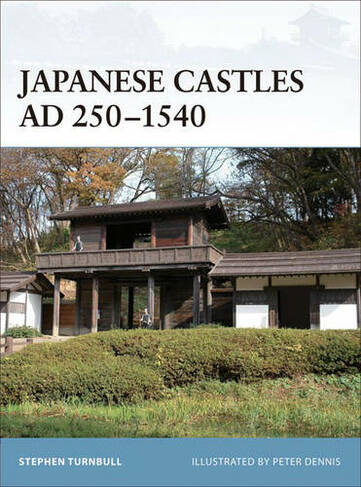 Renowned expert Stephen Turnbull examines the castles built in Japan, from the first primitive fortifications in the Yayoi Period (300 BC-AD 250) through to the first proper castles which began to be developed with the rise to power of the Yamato Court, the first emperors of Japan in around AD 250. Examining the close ties that early Japanese dynasties had to both China and Korea, Turnbull assesses how Japanese defensive architecture betrays these influences. Also examined is the effect that the terrain in Japan had on fortifications - from the early reliance on earthworks and palisades and the development of wooden and earth castles, often sited on the top of the mountains, into more elaborate stone constructions in the 15th century. Finally, the emergence of the stone towers that are so characteristic of samurai is investigated, as is the gradual adaptation of Japanese castles to accommodate the introduction of firearms. With previously unpublished photographs from the author's private collection and full-color artwork, including detailed cutaways, this is an essential guide to the fascinating development of Japanese castles. Illustrations (some col.)

Stephen Turnbull is recognised as one of the world's foremost military historians of the medieval and early modern periods. He first rose to prominence as a result of his 1977 book, The Samurai: A Military History. Since then he has achieved an equal fame in writing about European military subjects and has had 30 books published. He has always tried to concentrate on the less familiar areas of military history, in particular such topics as Korea, Eastern Europe, the Baltic states and the Teutonic Knights. The author lives in Leeds, UK.