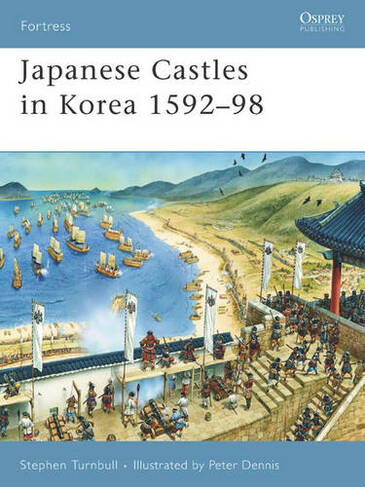 The Japanese invasion and occupation of Korea, which lasted from 1592 to 1598, was the only occasion in Japanese history when samurai aggression was turned against a foreign country. During the occupation of Korea the Japanese built 25 wajo or castles. Unlike the castles built in Japan, these fortifications were never developed or modernized after the Japanese departure. The details of late 16th-century castle construction are therefore better preserved than at many other sites. Written by Stephen Turnbull, an expert in the subject, this book examines the castles built by the Japanese in Korea, as well as the use made of existing Korean fortifications, particularly city walls. This resulted in curious hybrid fortifications that dominated the landscape until the Japanese were pushed out of the peninsula by a furious onslaught from huge Chinese armies. col. Illustrations

Stephen Turnbull is recognized as one of the world's foremost military historians of the medieval and early modern periods. He first rose to prominence as a result of his 1977 book, The Samurai: A Military History. Since then he has achieved equal fame writing about European military subjects and has published over 50 books. He always tries to concentrate on the less familiar areas of military history, in particular such topics as Korea, Eastern Europe, the Baltic states and the Teutonic Knights.