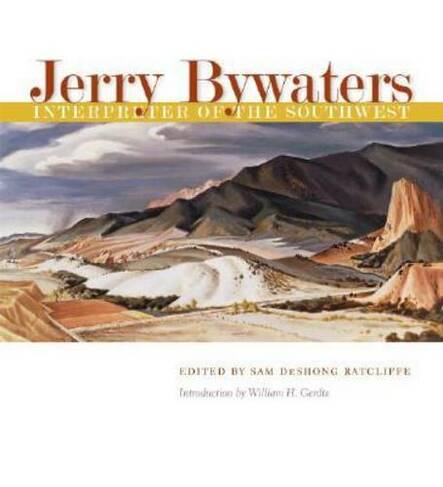 By Sam DeShong Ratcliffe (Contributor), William H. Gerdts (Contributor)
Hardback
https://www.whsmith.co.uk/products/jerry-bywaters-interpreter-of-the-southwest-joe-and-betty-moore-texas-arts-series/sam-deshong-ratcliffe/william-h-gerdts/hardback/9781585445912-01-000.html £29.92 rrp £31.50 Save £1.58 (5%)
GBP
Availability
Currently unavailable. We don't know when or if this item will be back in stock
With Free Saver Delivery
Details
FREE SHIPPING over £20 for Saver Delivery
Share

In the 1930s and 1940s, along with other members of a loosely affiliated group of artists known as the Dallas Nine, Jerry Bywaters pioneered the style later termed ""Lone Star Regionalism."" Working with equal ability in oil, watercolor, tempera, and pastel, Bywaters portrayed the natural world, towns, and people of Arizona, Colorado, New Mexico, and West Texas. This stunning retrospective volume of Bywaters' paintings - more than forty of them arranged in a full-color gallery - vividly interprets the American Southwest. Underlying all of Bywaters' work was some perspective on the interaction of people and the land. With character always the central feature, his portraiture featured a wide variety of subjects, from a prominent Dallas architect to two anonymous nuns the artist saw on a train and an unnamed member of the Navajo tribe he met on a visit to Shiprock, Arizona. He also depicted individuals in various tasks of everyday life, whether cowboys at a rodeo, oil field workers wrestling with a drill bit, or Mexican women washing clothes in a stream. In addition to the color gallery, the text is illustrated with letters, photographs, and ephemera from the artist's papers, the ""Jerry Bywaters Collection on Art of the Southwest"", housed in SMU's Jake and Nancy Hamon Arts Library. Essays by three scholars who knew and worked with Bywaters - Sam Ratcliffe, John Lunsford, and Francine Carraro - add context and detail about his contributions, and an introduction by William H. Gerdts sets the stage for appreciating the art. Bywaters directed the Dallas Museum of Fine Arts (now the Dallas Museum of Art) for two decades beginning in 1943. This book originated in conjunction with the exhibition, ""Jerry Bywaters, Interpreter of the Southwest,"" at SMU's Meadows Museum of Art, November 30, 2007 - February 24, 2008. 37 b&w illustrations, 43 colour paintings

SAM DeSHONG RATCLIFFE, who earned a Ph.D. in American studies from the University of Texas at Austin, is head of special collections in the Hamon Arts Library at Southern Methodist University, which holds the Jerry Bywaters Collection on Art of the Southwest. He has taught courses on the history and literature of Texas and the American West in SMU's history department and MLA program. His publications, including Painting Texas History to 1900, have won a number of awards.