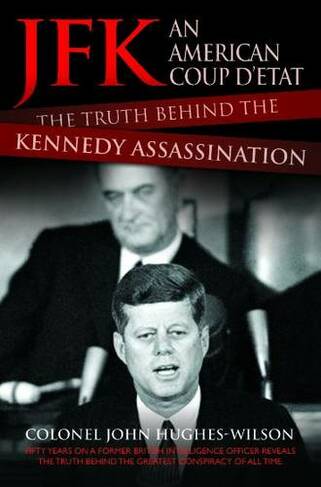 JFK - An American Coup D'etat: The Truth Behind the Kennedy Assassination

By John Hughes-Wilson (Author)
Paperback
https://www.whsmith.co.uk/products/jfk--an-american-coup-detat-the-truth-behind-the-kennedy-assassination/john-hugheswilson/paperback/9781784184209-12-000.html £8.19 rrp £9.99 Save £1.80 (18%)
GBP
Availability
In Stock
Free Delivery Available When You Spend £25 Or More
Details
Spend £25 On Products To Receive Free Standard Delivery To Your Home Or Free Next Working Day Click And Collect To Store
Share

Ever since President John F. Kennedy was gunned down in Dallas fifty years ago, various theories have swirled around what was a key event in American - and world - history. Whatever the conclusions of the US official Warren Report - that the President had been assassinated by a lone gunman, Lee Harvey Oswald - many people doubt that to be true. Indeed, President Nixon later admitted on tape that the report was 'a hoax committed on the American people.' John Hughes-Wilson, a former colonel in British Intelligence, set out in 2007 to go through the millions of words and thousands of pieces of evidence, to put together an intelligence jigsaw of what really happened that dreadful high noon in Dallas in 1963. The result is a dramatic exposure of what actually took place and a clear indication that, while some of the pieces of that jigsaw may be missing, the truth is emerging. While the US Federal Archive still keeps a million documents relating to the case under lock and key, it is beyond reasonable doubt that Jack Kennedy was the victim of a plot to remove the President of the United States. John Hughes-Wilson highlights the facts behind why Marilyn Monroe had to be silenced, LBJ's corrupt secrets, the Kennedys' secret Cuban coup plans, how the mafia manipulated politicians and the CIA, and how the assassination was covered up. Reading this book no one can be in any doubt that JFK's death was not at the hands of a lone deranged gunman, but a deadly plot to remove a President who threatened vested interests at home and abroad.

Colonel John Hughes-Wilson served in the British Army's Intelligence Corps for 30 years and is a specialist consultant to the UN and the European Union. He is the author of "A Brief History of the Cold War," "Military Intelligence Blunders," and "The Pupper Masters."