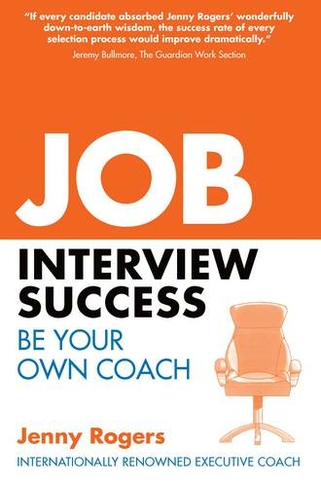 Job Interview Success: Be Your Own Coach

One of the most important keys to achieving success in your career is the ability to impress at interview. This is an essential guide to success for anyone attending a job interview. Although it is fundamental to getting any job, the interview is still an experience most professionals dread. The fears of losing face, drying up and ultimately failing to get the job can lead to nervousness and low confidence. In this book, Jenny Rogers offers practical advice on research and preparation, giving guidance on how to behave during the whole selection process and present your skills and experience in a relevant manner. Handling the preliminaries and the actual interview - from personal presentation to asking questions - and what to do when you are offered the job are also examined. Job Interview Success provides you with all the information you need to get the result you want and prove you are in the business of achieving success.Read it the night before in order to refresh your skills. Better still, read it in time to do the research and preparation which will enhance your chances of succeeding and getting the job you want.

Jenny has been teaching adults throughout her career, starting with 18 year olds in a College of Further education who didnt really want to be there and branching out to adult education and over the last sixteen years, management development and training other executive coaches. She has an international reputation as a coach, consultant and writer on learning and leadership issues. She is widely experienced as a consultant in organisational development and works as executive coach to many directors and chief executives in leading public and private sector organisations. As well as her work as a college lecturer, Jenny has also worked as a freelance journalist, commissioning editor and for twelve years as a BBC television producer where one of her projects was the 'discovery' of Delia Smith. She also ran the BBCs management training department for three years in the early nineteen nineties. Jenny has a keen interest in psychological assessment and her books on the MBTI Sixteen Personality Types and Influencing Others through the Sixteen Personality Types and on the FIRO-B (co-authored with Judy Waterman) sell well on both sides of the Atlantic. She is Series Editor for the Open University Press series Coaching in Practice.