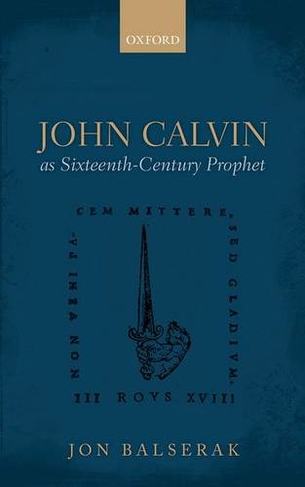 John Calvin as Sixteenth-Century Prophet examines Calvin's sense of vocation. Jon Balserak argues that Calvin believed himself to be a prophet "placed over nations and kingdoms to tear down and destroy, to build and to plant" (Jer 1: 10). With this authority, Calvin pursued an expansionist agenda which blended the religious, political, and social towards making France, upon which he turned his attentions especially after 1555, Protestant. Beginning with an analysis of the two trajectories of thought existing within Christian discourse on prophecy from the patristic to the Early Modern era, this study goes on to locate Calvin within a non-mystical, non-apocalyptic prophetic tradition that focused on scriptural interpretation. Balserak demonstrates how Calvin developed a plan to win France for the gospel; a plan which included the possibility of armed conflict. To pursue his designs, Calvin trained "prophets" who were sent into France to labor intensely to undermine the king's authority on the grounds that he supported idolatry, convince the French Reformed congregations that they were already in a war with him, and prepare them for a possible military uprising. An additional part of this plan saw Calvin search for a French noble willing to support the evangelical religion, even if it meant initiating a coup. Calvin began ruminating over these ideas in the 1550s or possibly earlier. In this analysis, the war which commenced in 1562 represents the culmination of Calvin's years of preparation.

Jon Balserak is an historian of Early Modern Europe, particularly France. He specializes in intellectual, religious, and cultural history. He was born in Washington D.C. and studied in the U.S. and U.K., completing his Ph.D. at University of Edinburgh in History under the late Professor David F. Wright. He has been at the University of Bristol since 2008.