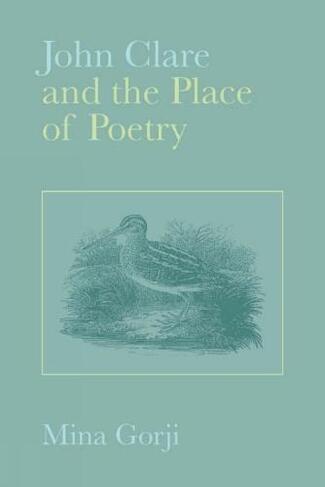 John Clare and the Place of Poetry: (Liverpool English Texts and Studies 54)

Traditional accounts of Romantic and nineteenth-century poetry, have depicted John Clare as a peripheral figure, an 'original genius' whose talents set him apart from the mainstream of contemporary literary culture. But in recent years there has been a major shift of direction in Clare studies. Jonathan Bate, Zachary Leader and others have helped to show that Clare, far from being an isolated genius, was deeply involved in the rich cultural life both of his village and the metropolis. This study takes impetus from this new critical direction, offering an account of his poems as they relate to the literary culture of his day, and to literary history as it was being constructed in the early nineteenth century. Gorji defines a literary historical context in which Clare's poetry can best be understood, paying particular attention to questions of language and style. Rather than situating Clare in relation to Romantic poets such as Wordsworth, Coleridge and Shelley, John Clare and the Place of Poetry considers his poetry in relation to eighteenth-century traditions as they persisted and developed in the Romantic period. This timely book is for scholars and students of Clare and eighteenth and nineteenth century poetry, but it should also appeal to the expanding audience for John Clare's work in the UK and USA.