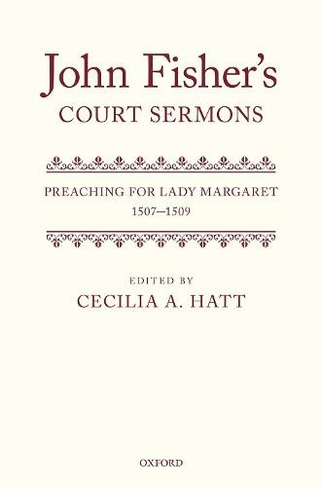 This is a critical edition of John Fisher's Treatise on the Penitential Psalms, sermons delivered in 1507-1508 to the household of Lady Margaret Beaufort, the mother of King Henry VII, who caused them to be published as the first English sermon collection ever printed. Also included is Bishop Fisher's funeral sermon for King Henry and his "month's mind" sermon for Lady Margaret herself, who died shortly after her son. Lady Margaret Beaufort was Fisher's patron and a notable benefactor to the University of Cambridge, where with his guidance she renewed Queens and Christ's Colleges, and founded a third, St John's, which her chaplain Fisher brought to completion after her death. The book features the subtitle "Preaching for Lady Margaret" because she was responsible for bringing the Treatise to general public attention and all these sermons owe their delivery to this remarkable woman, together with the gratitude of John Fisher's modern readers, because Fisher himself rarely sought publication for his English works. They are packed with scholarly reference to patristic and medieval theology, but also to contemporary chronicles, bestiaries and works of natural history and classical authors. This distinguished Treatise and its companion sermons gives the reader a glimpse into Fisher's mind, steeped in and devoted to the learning of his time yet always eager for the new scholarship of the humanists and their discoveries.

Cecilia A. Hatt is an academic specialising in English humanists of the early 16c, particularly John Fisher. Dr Hatt gained her D.Phil from Blackfriars, University of Oxford.