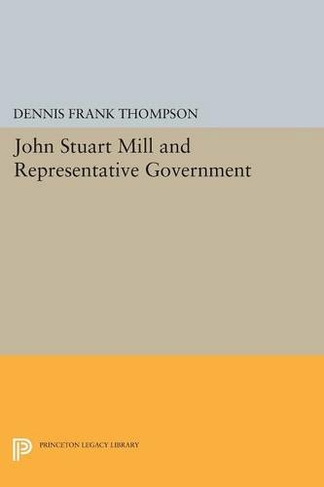 Although Mill regarded Considerations on Representative Government as a mature statement of his theory of democracy, critics have tended to treat it less seriously than most of his other major works. Dennis Thompson argues that this neglect has led to inadequate interpretations of Mill's thought on democracy. Drawing where appropriate on other writings by Mill, the author restores a balanced view by studying the structure of the theory expounded in Representative Government. Representative Government is shown to be more coherent and systematic than has generally been assumed. In the first two chapters the author examines separately Mill's views of political participation and competence. He then considers the philosopher's effort to combine participation and competence at any particular time in a theory of government and to reduce conflict between them over time in a theory of development. Basic features of Mill's view are subjected to critical scrutiny, and modifications are suggested to overcome the deficiencies noted. Throughout, Mill's claims are compared with the ideas and findings of recent social science, leading to the conclusion that his theory remains a valuable resource for contemporary thinking about democracy. Originally published in 1976. The Princeton Legacy Library uses the latest print-on-demand technology to again make available previously out-of-print books from the distinguished backlist of Princeton University Press. These editions preserve the original texts of these important books while presenting them in durable paperback and hardcover editions. The goal of the Princeton Legacy Library is to vastly increase access to the rich scholarly heritage found in the thousands of books published by Princeton University Press since its founding in 1905.