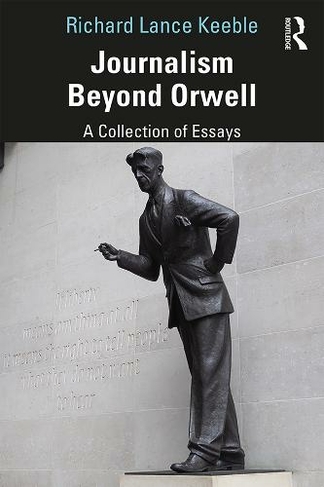 Journalism Beyond Orwell adapts and updates pioneering work by Richard Lance Keeble to explore George Orwell's legacy as a journalist in original, critical - and often controversial - ways. Though best known as the author of Animal Farm and Nineteen Eighty-Four, Orwell was, throughout his career, a journalist. The essays in this collection explore Orwell's important legacy: as a practising activist journalist critical of the dominant media; as a polemicist, essayist and novelist constantly concerned with issues relating to war and peace; as a literary journalist determined to make 'political writing an art'; and as a writer who warned of the growing powers of the secret state. Through this highly individualistic essay collection that connects Orwellian themes to modern journalism, Richard Lance Keeble explores key topics, including: Orwell the 'proto-blogger' How Orwell put his political economy critique of the corporate press into practice Information warfare in an age of hyper-militarism The manufacture of the myth of heroic warfare in the reporting of the Afghan conflict The debates over the theory and practice of peace journalism The ethical challenges for journalists reporting on conflict The crucial role of the alternative media The pleasures and pitfalls of the celebrity profile This collection will be of particular interest to students and researchers in journalism studies, English literature, media, intelligence studies and international relations.

Richard Lance Keeble is Professor of Journalism at the University of Lincoln and Honorary Professor at Liverpool Hope University. Chair of the Orwell Society, he has written and edited 40 books. In addition, he has written more than 50 book chapters and over 30 academic journal articles.