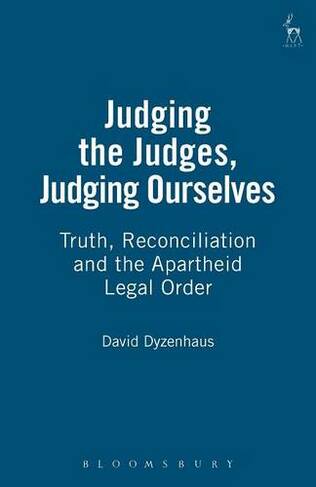 With a Foreword by the South African Minister of Water Affairs and Forestry, Kader Asmal. The Truth and Reconciliation Commission (TRC), established in South Africa after the collapse of apartheid, was the bold creation of a people committed to the task of rebuilding of a nation and establishing a society founded upon justice, equality and respect for the rule of law. As part of its historic, cathartic, mission, the TRC held a special hearing, calling to account the lawyers - judges, academics and members of the bar -who had been crucial participants in the apartheid legal order. This book is an account of those hearings, and an attempt to evaluate, in the light of theories of adjudication, the historical role of the judiciary and bar in the apartheid years. This book offers us the spectacle of an entire legal system on trial. The echoes from this process are captured here in a way which will appeal to all readers, lawyers and non-lawyers alike, interested in the relationship between law and justice, as it is exposed during a period of transition to democracy. "...an excellent commentary on a crucial period...a clear, concise and thorough analysis...This book should be required reading for anyone with a concern for the relationship between law and justice. .." -Paul Williams (Journal of Modern African Studies) "a sustained reflection on questions of complicity, on the politics of the Rule of Law, and on the relation between law and justice. It presents a forceful case for an 'inner morality' not just of law, but of the citizenry's attitude towards that law". -Scott Veitch (Res Publica) "The Truth and Reconciliation Hearings, as rendered in Professor Dyzenhaus' book, capture the misery and suffering of a nation. Sometimes almost unbearable to read, it is a fascinating account of the human dimensions of law's effect...the book is as much about hope as it is about pain. Judging the Judges, Judging Ourselves is singularly effective in combining a scholarly dissection of legal issues with an underlying, passionate quest for justice. To this reader at least, it was a page-turner" -Vivian Grosswald Curran (Alberta Law Review) "...an excellent book for at least three reasons. First, it is a critically engaged, firsthand account of a unique legal and political event...Second, it develops an extended argument for a challengingly normative conception of the rule of law. And third, the book is well written and a pleasure to read." -Michael Milde (Canadian Journal of Law and Jurisprudence) "Dyzenhaus's sophisticated treatment...may yet serve as a benchmark statement in future debates, whether or not one agrees with its philosophical point of departure." -Aletta J. Norval (Constellations) "As legal fora increasingly lose direct state-related implementation power as a result of globalization and regionalization, judges will need to consider methods that pursue civil and social justice when actual implementation is likely to be imperfect or ineffectual. Judging the Judges, Judging Ourselves is an excellent contribution to considerations of this historical dilemma." -John P. McCormick (New York University Journal of Law and Social Change) "...the author subjects to sustained critical analysis fundamental concepts, such as judicial independence, parliamentary sovereignty and the rule of law, which go to the very heart of the judicial function...This is a splendid book." -The Hon Sir Anthony Mason "Judging the Judges, Judging Ourselves underscores the imperative that, as the idea of equal citizenship takes root in the new South Africa, the links between social justice and procedural morality should be forged rather than assumed." -Christine Sypnowich (Oxford Journal of Legal Studies)

David Dyzenhaus is Professor of Law and Philosophy at the University of Toronto.