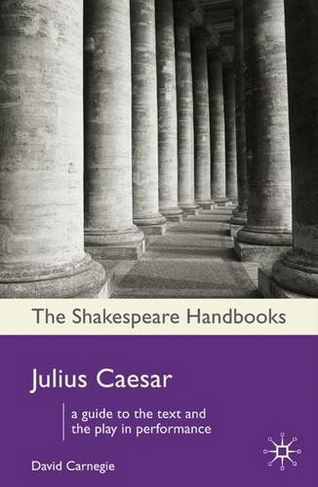 By David Carnegie (Author)
Paperback
https://www.whsmith.co.uk/products/julius-caesar-shakespeare-handbooks/david-carnegie/paperback/9781403948915-12-000.html £16.99
GBP
Availability
In Stock
Free Delivery Available When You Spend £25 Or More
Details
Spend £25 On Products To Receive Free Standard Delivery To Your Home Or Free Next Working Day Click And Collect To Store
Share

Julius Caesar is possibly the play that opened The Globe theatre. Certainly it was one of the first to be performed there, using the acting resources of the company and the new stage space with dramatic confidence. The first of Shakespeare's mature tragedies, Julius Caesar is also stirring history. The great political debates between Republic and Empire, democracy and dictatorship, mob rule and tyranny are as applicable today as they were in Elizabethan England, and to the Romans themselves in 44 BC. Highlights of this Handbook include: * a commentary at the heart of the book which guides the reader through the play as it unfolds moment by moment in performance, with special attention to the theatrical choices facing actors and directors * an account of the play's sources and its cultural context * analysis of influential performances on stage and screen, and of changes in the play's critical reception. Lively and stimulating, this invaluable guide offers a unique investigation of the theatrical life of one of Shakespeare's great tragedies. 168 p.

DAVID CARNEGIE is Professor of Theatre at Victoria University of Wellington, New Zealand, and a Fellow of the New Zealand Academy of the Humanities. He is co-editor of The Works of John Webster and has published widely on early modern dramaturgy and stagecraft. His professional theatre experience includes acting, directing and extensive work as a dramaturg on Shakespeare productions.