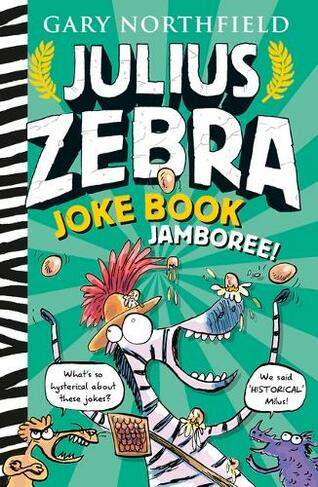 By Gary Northfield (Author), Gary Northfield (Illustrator)
Paperback
£5.39 rrp £5.99 Save £0.60 (10%)
GBP
Availability
In Stock
Free Delivery Available When You Spend £15 Or More
Details
Spend £15 On Products To Receive Free Standard Delivery To Your Home Or Free Next Day Click and Collect To Stores

The Champion of Rome returns, with the champion of all Joke Books! Brimming with brazenly bonkers and clever jokes, this is the ideal handbook for kids with a budding comedic talent (and an essential guidebook for those without...). This new addition to the Julius Zebra collection encompasses all of Julius and friends' adventures.

Gary Northfield is an award-winning and bestselling author and illustrator of children's books and comics. His bestselling Julius Zebra series has now been translated into several languages worldwide and includes four books: Julius Zebra: Rumble with the Romans; Julius Zebra: Bundle with the Britons; Julius Zebra; Entangled with the Egyptians; and Julius Zebra: Grapple with the Greeks. Julius Zebra: Rumble with the Romans! won the 2017 Spellbinding Book Award voted for by children. Gary's other books include The Terrible Tales of the Teenytinysaurs! and Gary's Garden. Gary's work is also published in The Beano, The Dandy and National Geographic Kids among many other magazines. He lives with his dog Stan, partner Nicky and baby twins. Find Gary online at garynorthfield.com, on Twitter as @garynorthfield and Instagram as @stupidmonster.