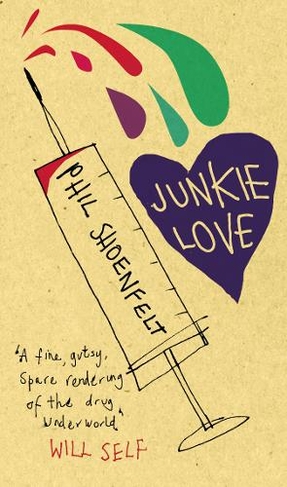 Camden Town. The late 1980s. A hinterland of rundown squats, petty crime and hard drugs. Amid this sordid milieu, junkies Phil and Cissy go about their daily routine of sex, shooting up and dodging the police. For a while they have each other and nothing else seems to matter. But as their addictions worsen, money runs short and Cissy's psychotic ex-boyfriend is released from prison, their relationship begins to disintegrate into mutual distrust and loathing... Raw, repellent and yet shot through with mordant wit, Junkie Love is Phil Shoenfelt's semi-fictionalised account of the heroin addiction that almost cost him his sanity and his life.

Phil Shoenfelt was born in Bradford, England, in December 1952. After colliding with the London punk scene in the mid-1970s, he moved to New York where he played in several punk and post-punk bands, such as Khmer Rouge. Returning to London in 1984, he continued making music until encroaching heroin addiction brought a temporary halt to all artistic activities. Finally kicking the habit after eleven years, he embarked upon a solo career and in 1995 moved to Prague. In recent years he has produced several CDs of his music on various independent labels: solo; with his band, Southern Cross; and with the Berlin-based Australian group Fatal Shore. Junkie Love is Shoenfelt's first novel.