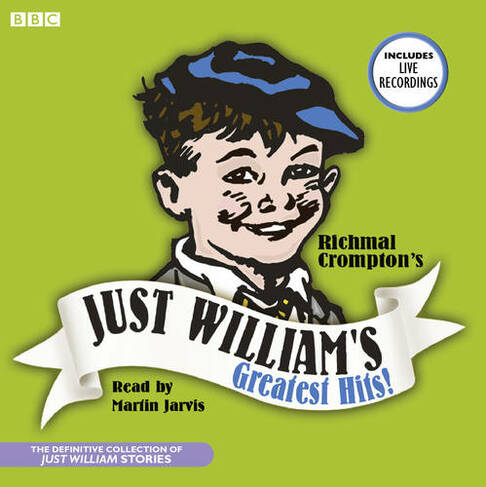 Whether a long-standing fan or a first time listener, this collection of stories is the ultimate Just William audio experience. With over four hours of laugh-out-loud stories, including two stories performed to a live audience, Just William's Greatest Hits! is the perfect entertainment for the whole family. Boring car journeys are a thing of the past! Along with the live stories are Martin Jarvis's personal reflections of recording Just William, giving the listener a true behind- the-scenes insight into how he brings those marvellous characters to life. This is the perfect gift for the Just William fan, whether young or old. The stories included are: 'The Midnight Adventure of Miss Montague'; 'The Outlaws and Cousin Percy'; 'A Bit of Blackmail'; 'William and the Bomb'; 'William and the Snowman'; 'Violet Elizabeth Runs Away'; 'William and the Real Laurence'; 'Finding a School for William'; 'William's Truthful Christmas'; 'The Haunted House'; 'William and the Begging Letter'; 'William and the Badminton Racket'; 'A Question of Exchange'; 'The Weak Spot'; 'William the Rat Lover'; 'The Sweet Little Girl in White' and 'William and the Princess Goldilocks'. 4 CDs. 4 hrs 3 mins.

Richmal Crompton was born in Bury, Lancashire, in 1890. She was educated at St. Elphin's School and studied Classics at Royal Holloway College before becoming a schoolmistress. However, her teaching career was cut short by an attack of polio in 1923, which confined her to a wheelchair. She became a full-time author, and wrote over 40 books for adults, but she is best known for her hugely popular Just William books. William first appeared in 1919 in a short story for Home Magazine. The first collection featuring him was published in 1922, and he went on to star in 38 further books (the final one, William the Lawless, was published posthumously in 1970). They have sold over 12 million copies in the UK alone, been translated into nine languages and remain enduringly popular today.