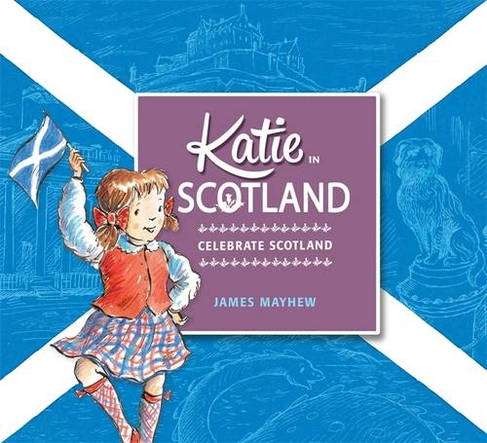 By James Mayhew (Author)
Paperback
https://www.whsmith.co.uk/products/katie-in-scotland/james-mayhew/paperback/9781408332412-12-000.html £5.94 rrp £6.99 Save £1.05 (15%)
GBP
Availability
In Stock
Free Delivery Available When You Spend £25 Or More
Details
Spend £25 On Products To Receive Free Standard Delivery To Your Home Or Free Next Working Day Click And Collect To Store

Discover the sights of Scotland with this classic Katie picture book. With so much to see and do in Scotland, it's lucky that Katie, Jack and Grandma have a very special guide to show them the best spots. Join their fun-packed tour - with Nessie, the Loch Ness Monster! Landmarks featured include Glasgow's Kelingrove Park, Edinburgh Castle, Holyrood, The Royal Mile, Scotland's National Gallery and Greyfriar's Bobby. 'A delightful tale with superb illustrations' - The Scots Magazine

James Mayhew studied at Maidstone College of Art and his first children's book, Katie's Picture Show was published in 1989. It's been firmly in print ever since, recognised universally as the original and best introduction to art for children. Many more titles have followed, and the series sells in museums and galleries all over the world, from the Met in New York, to the Uffizi in Florence, the Louvre in Paris and beyond. He is also the creator of the much-loved Ella Bella Ballerina series, and many other titles. Alongside his work in publishing, James has devised and performed in a hugely successful series of concerts for children, combining live classical music, storytelling and live art. From Peter and the Wolf, to Scheherazade, James has worked internationally with many different orchestras and musicians, creating illustrations in time to music. James grew up in Suffolk but now lives in Hertfordshire with his wife and small son.http://james-mayhew-author-illustrator.blogspot.co.uk/