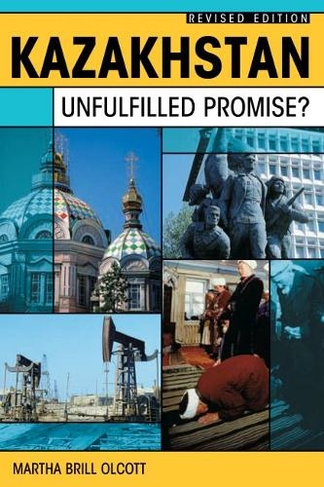 At the outset of independence 18 years ago, Kazakhstan's leaders promised that the country's rich natural resources, with oil and gas reserves among the largest in the world, would soon bring economic prosperity. It appeared that democracy was beginning to take hold in this newly independent state. Nearly two decades later, Kazakhstan has achieved the World Bank's ranking of a ""middle economic country,"" but its economy is straining from the global economic crisis. The country's political system still needs fundamental reform before Kazakhstan can be considered a democracy. Kazakhstan: Unfulfilled Promise examines the development of this ethnically diverse and strategically vital nation, which seeks to play an influential role on the international stage. Praise for the previous edition of Kazakhstan: "This detailed but accessible work will be the definitive work on the newly independent state of Kazakhstan." - Choice "[Olcott]... knows more about Kazakhstan than anyone else in the West." - New York Review of Books ""Not only shares the lucid insights and depth of a seasoned observer, it greatly enriches the literature on post-Soviet transitions." -Foreign Affairs

Martha Brill Olcott is a senior associate with the Russia and Eurasia Program at the Carnegie Endowment for International Peace, Washington, USA. Olcott specializes in the problems of transitions in Central Asia and the Caucasus as well as the security challenges in the Caspian region more generallly. She is the author of Central Asia's Second Chance (Carnegie, 2005).