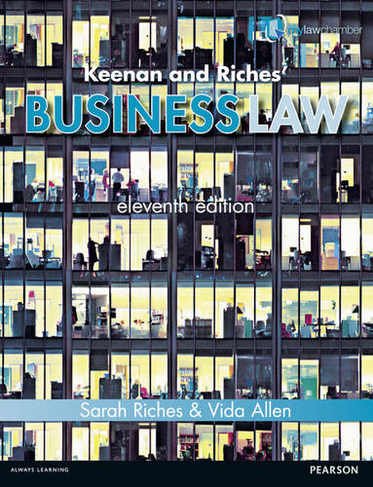 Keenan & Riches' Business Law is well known and highly regarded as a reliable and practical guide to the law as it applies to the world of business. The text combines a solid academic reputation with clear language and practical features designed to assist the non-specialist, making it a favourite choice of students and professionals. The eleventh edition has been thoroughly updated to incorporate recent legal changes including the European Union Act 2011, the Parliamentary Voting System and Constituencies Act 2011, the Fixed Term Parliaments Act 2011, the Equality Act 2010 and changes in financial regulation as it affects companies. References to treaty articles have been renumbered to reflect changes made by the Consolidated Version of the Treaty on European Union and the Treaty on the Functioning of the Union. The new edition also presents current proposals for reform in areas of business law such as aspects of the Unfair Terms in Consumer Contracts Regulations, competition law, consumer rights and defamation.