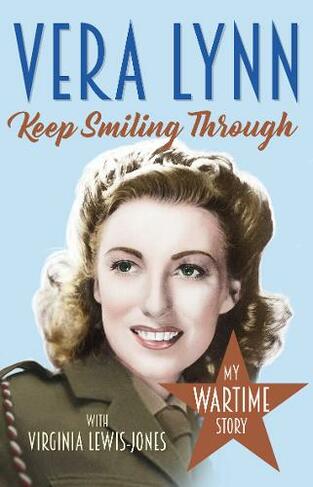 Keep Smiling Through: My Wartime Story

In the year of her 100th birthday, Dame Vera Lynn's fascinating and life-affirming wartime memoir from the forces' sweetheart's of her adventures entertaining the troops in far-flung Burma. 'I was just twenty-seven years old when I went to Burma. It was an experience that changed my life for ever. Up until that time I had not really travelled anywhere at all, apart from one touring visit to Holland with a band I was singing with before the war, and I had certainly never been in an aeroplane. But I wanted to make a difference, to do my bit.' And she did. Written with her daughter, Virginia Lewis-Jones this is a powerful and life-affirming account of the time she spent with troops in wartime Burma. Based, in part on a diary she kept, alongside unpublished personal letters and photographs from surviving veterans and their families, it explores why it was such a life-defining event for her and shows how her presence helped the soldiers, airmen and others who heard her sing.

Dame Vera Lynn was born Vera Margaret Welch on 20 March 1917 and adopted the stage name of Vera Lynn at the age of eleven. She was already an established singer by the time the war broke out in 1939, but during the Second World War had enormous success with songs like 'We'll Meet Again', 'The White Cliffs of Dover' and 'A Nightingale Sang in Berkeley Square'. She continued to have a successful career after the war, hosted her own variety TV series on BBC1 in the late 1960s and early 1970s, and was a guest on a number of other shows including the Morecambe & Wise Christmas Show in 1972. She also became involved in many different charities. She became a Dame in 1975 and was awarded the Burma Star in 1985. In 2009 she published an autobiography, Some Sunny Day, which became a number-one bestseller in hardback. In 2016 she was appointed Member of the Order of the Companions of Honour for services to entertainment and charity.Virginia Lewis-Jones is Dame Vera Lynn's daughter. She was born in 1946 and for a time accompanied her mother on tour as her dresser. She has had many careers including working in a fashion house, working for Warner Bros Records in California and as a researcher at the BBC. She was at the BBC for many years and worked on various shows including Parkinson, Crackerjack and the royal concerts. She later trained as a complementary therapist in reflexology and holistic massage with aromatherapy, and has her own complementary therapy business alongside running her mother's music company. She is also the vice-president of the Dame Vera Lynn Children's Charity. She lives in Ditchling, East Sussex with her husband Tom, who is a retired RAF pilot, and her mother.