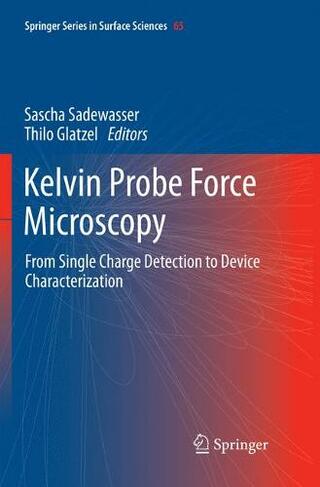 This book provides a comprehensive introduction to the methods and variety of Kelvin probe force microscopy, including technical details. It also offers an overview of the recent developments and numerous applications, ranging from semiconductor materials, nanostructures and devices to sub-molecular and atomic scale electrostatics. In the last 25 years, Kelvin probe force microscopy has developed from a specialized technique applied by a few scanning probe microscopy experts into a tool used by numerous research and development groups around the globe. This sequel to the editors' previous volume "Kelvin Probe Force Microscopy: Measuring and Compensating Electrostatic Forces," presents new and complementary topics. It is intended for a broad readership, from undergraduate students to lab technicians and scanning probe microscopy experts who are new to the field. 40 Tables, color; 194 Illustrations, color; 40 Illustrations, black and white; XXIV, 521 p. 234 illus., 194 illus. in color.

Sascha Sadewasser has been the Principal Investigator of the Laboratory for Nanostructured Solar Cells at INL - International Iberian Nanotechnology Laboratory (Portugal) since 2011. In 1999, he received his PhD from Washington University in St. Louis (USA). After a post-doc at Hahn-Meitner Institut Berlin and a Ramon y Cajal fellowship at the CNM in Barcelona (Spain), he was a group leader at the Helmholtz-Zentrum Berlin (Germany). Sascha's research focuses on the development of nanostructures for and of chalcopyrite materials for the improvement of solar cells. He is an expert on scanning probe microscopy, and specifically Kelvin probe force microscopy, applied to semiconductor and solar cell research. His work has provided important insights into the physics of grain boundaries in polycrystalline Cu(in,Ga)Se2 thin-film solar cells. He has published over 80 peer-reviewed papers and 5 book chapters, and has been granted 3 patents. He is also a member of several scientific committees and evaluation boards. Thilo Glatzel is leader of the force microscopy group which is part of the research group from Prof. E. Meyer at the University of Basel. He is co-author of 115 international publications, contributed several book chapters, co-edited the first volume of the book on Kelvin probe force microscopy (KPFM), and has more than 100 contributions to international scientific conferences. During his dissertation at the Helmholtz-Zentrum Berlin he investigated interfaces and surfaces of chalcopyrite thin film solar cells based on Cu(Ga,In)(S,Se)2 absorber materials by KPFM. His work is now focused on the development of instruments and measurement techniques for high resolution scanning probe microscopy and the analysis of molecules and insulating and semiconducting surfaces at the nanometer scale. The expertise of the group is clearly focused on the nanoscale analysis and preparation of highly ordered surfaces down to the molecular and atomic scale, however with a focus on optoelectronic processes.