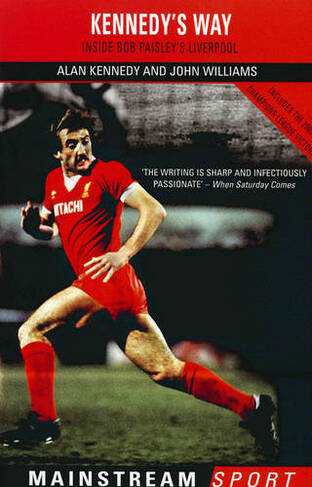 By Alan Kennedy (Author), John Williams (Author)
Paperback
https://www.whsmith.co.uk/products/kennedys-way-inside-bob-paisleys-liverpool/alan-kennedy/john-williams/paperback/9781845960346-01-000.html £7.99
GBP
Availability
Currently unavailable. We don't know when or if this item will be back in stock
Free Saver Delivery on orders over £20
Details
FREE SHIPPING over £20 for Saver Delivery
Share

Many years have now passed since the greatest period of European dominance by any English football club came to an end. Between 1977 and 1984, Liverpool won the European Cup an unprecedented four times and established themselves as the number-one team in Europe. It was during the successful European Cup campaigns of 1981 and 1984 that the unlikely figure of Alan Kennedy came to dominate the headlines. Folk-hero left-back Alan Kennedy - nicknamed 'Barney Rubble' by fans after The Flintstones character due to his straightforward, no-frills approach to the game - scored the winning goal in the 1981 European Cup final against Real Madrid, as well as the nerve-twanging winning shoot-out penalty against AS Roma in 1984, a feat which secured his position in European football history. Kennedy's Way examines Kennedy's footballing career under manager Bob Paisley (and, later, under Joe Fagan) and provides a retrospective account of Liverpool's dominance during those years. Drawing on Kennedy's memories of the period, as well as those of other players and backroom staff involved with the Reds at that time, it is an irreverent, revealing account of the dressing-room culture at the club while it was at the height of its powers. The book concludes with reflections on Kennedy's post-playing life and on the trajectory of Liverpool since the Heysel and Hillsborough tragedies, in 1985 and 1989 respectively, right up to recent events at the club, including the exit of Gerard Houllier and the team's dramatic return to the pinnacle of European club football under new manager Rafael Benitez.

Alan Kennedy's career in football began in 1972. He played for a number of teams, including Newcastle United, Sunderland and, most famously, Liverpool. He retired from the game in 1991 whilst at Wrexham, where he played his 500th game. He now comments on football for local and national radio, and is an after-dinner speaker. John Williams has written a number of books on football culture and is also the author of several other books on Liverpool Football Club. He lives in Leicester.