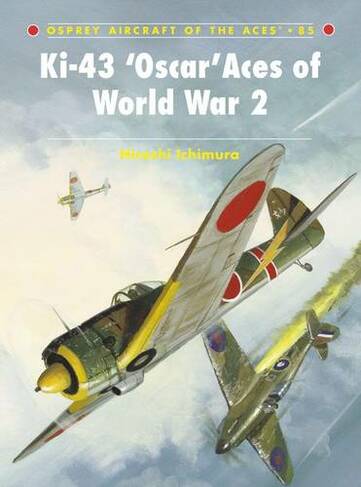 By Hiroshi Ichimura (Author), Jim Laurier (Illustrator)
Paperback
https://www.whsmith.co.uk/products/ki43-oscar-aces-of-world-war-2-aircraft-of-the-aces-no-85/hiroshi-ichimura/jim-laurier/paperback/9781846034084-01-000.html £13.79 rrp £14.99 Save £1.20 (8%)
GBP
Availability
Currently unavailable. We don't know when or if this item will be back in stock
Free Saver Delivery on orders over £20
Details
FREE SHIPPING over £20 for Saver Delivery
Share

Dubbed the 'Oscar' by the Allies, the Ki-43 Hayabusa Peregrine was the most prolific Japanese fighter of World War 2. Designed for manoeuverability and speed, the low-wing model meant that firepower and safety had to be sacrificed, with only two machine guns per plane. Despite this, more Japanese pilots achieved Ace status flying the Hayabusa than any other plane. This book expertly charts the experiences of the pilots and discusses the early stages of the war in South-East Asia, China, Burma and New Guinea. Accompanied by detailed appendices and specially commissioned artwork, this is the first volume in English to focus exclusively on the exploits of the Ki-43. Illustrations (some col.)

Hiroshi Ichimura is the son of a JAAF wartime pilot. He has worked as the editor of various modeling magazines in Japan since 1981, and is presently editor-in-chief of Scale Aviation. His publishing house, Dai Nippon Kaiga, has also been releasing Japanese-language Osprey series titles in Japan since 2000 - indeed, he has translated five of them. The author/co-author of four JAAF-related titles, this will be his first book for Osprey.