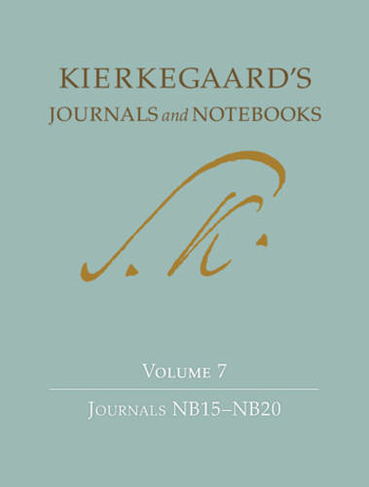 For over a century, the Danish thinker Soren Kierkegaard (1813-55) has been at the center of a number of important discussions, concerning not only philosophy and theology, but also, more recently, fields such as social thought, psychology, and contemporary aesthetics, especially literary theory. Despite his relatively short life, Kierkegaard was an extraordinarily prolific writer, as attested to by the 26-volume Princeton University Press edition of all of his published writings. But Kierkegaard left behind nearly as much unpublished writing, most of which consists of what are called his "journals and notebooks." Kierkegaard has long been recognized as one of history's great journal keepers, but only rather small portions of his journals and notebooks are what we usually understand by the term "diaries." By far the greater part of Kierkegaard's journals and notebooks consists of reflections on a myriad of subjects--philosophical, religious, political, personal. Studying his journals and notebooks takes us into his workshop, where we can see his entire universe of thought. We can witness the genesis of his published works, to be sure--but we can also see whole galaxies of concepts, new insights, and fragments, large and small, of partially (or almost entirely) completed but unpublished works. Kierkegaard's Journals and Notebooks enables us to see the thinker in dialogue with his times and with himself. Volume 7 of this 11-volume series includes six of Kierkegaard's important "NB" journals (Journals NB15 through NB20), covering the months from early January 1850 to mid-September of that year. By this time it had become clear that popular sovereignty, ushered in by the revolution of 1848 and ratified by the Danish constitution of 1849, had come to stay, and Kierkegaard now intensified his criticism of the notion that everything, even matters involving the human soul, could be decided by "balloting." He also continued to direct his barbs at the established Danish Church and its clergy (particularly Bishop J. P. Mynster and Professor H. L. Martensen), at the press, and at the attempt by modern philosophy to comprehend the incomprehensibility of faith. Kierkegaard's reading notes include entries on Augustine, the Stoics, German mystics, Luther, pietist authors, and Rousseau, while his autobiographical reflections circle around the question of which, if any, of several essays explaining his life and works he ought to publish. Perhaps unsurprisingly, Kierkegaard's more personal reflections return once again to his public feud with M. A. Goldschmidt and his broken engagement to Regine Olsen. Kierkegaard wrote his journals in a two-column format, one for his initial entries and the second for the extensive marginal comments that he added later. This edition of the journals reproduces this format, includes several photographs of original manuscript pages, and contains extensive scholarly commentary on the various entries and on the history of the manuscripts being reproduced. 10 halftones.