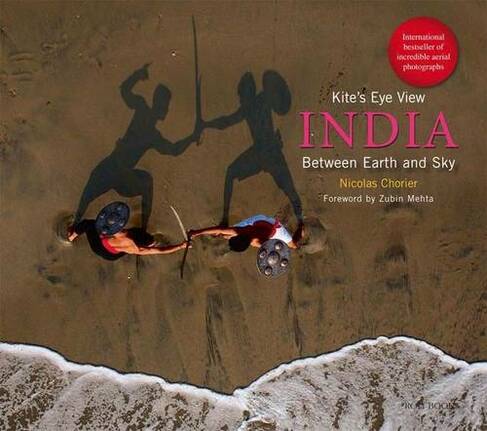 Aerial photography is prohibited in India. It can only be done with permission from various government agencies. It is for this reason that there are hardly any substantial books on India from the air. For the first time, Nicolas Chorier achieves this feat by using the fascinating technique of kite photography (taking aerial pictures by using a kite to lift the camera). This book showcases the finest work of the French photographer, who has been shooting in India for many years. Seen here are unique and spectacular views of the wonders of India; jewels such as Amber Fort, Mehrangarh Fort, Nagaur Fort, Pushkar, Chittorgarh, Taj Mahal, Hampi, Mamallapuram and the beaches and backwaters of Kerala. Accompanying the pictures is the photographer's anecdotal take on his India odyssey. For anyone who loves India and its rich heritage, this lavish book is a sumptuous treat for the eyes. 172 Colour

French photographer Nicolas Chorier, has been an exponent of kite photography for over ten years. He has used the technique in the fields of agronomy research, archaeology, tourism, national heritage surveys and wildlife documentaries. Each of these applications led him to devise tailor-made hardware and photographic techniques, with the result that he is now a master of the art form. Chorier has shot extensively all over the world, in places as diverse as India, Brazil, Malaysia, Laos and Uzbekistan. His pictures on the Nagaur Fort were part of a report that received the UNESCO Asia Pacific Heritage Award for architectural conservation. Documentaries on him have been screened on French television, and he has had several exhibitions of his work worldwide, including one across India.