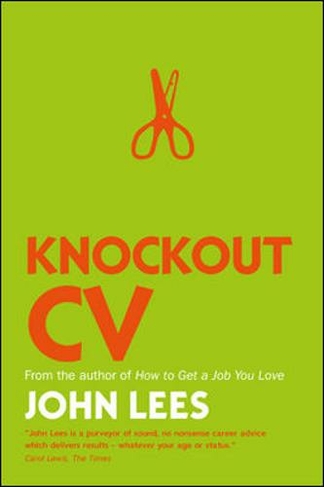 "John Lees is a purveyor of sound, no nonsense career advice which delivers results, whatever your age or status." Carol Lewis, Business Features Editor, The TimesIt doesn't take months to learn how to write a CV that works, but it does take a few hours. This book is designed to take you through that process quickly, taking some short cuts, encouraging your readers to say one simple word: "yes".Features: Step by step approach to building a CV from scratch Detailed advice on getting bullet points and the profile rightExample CVs, including entry level and executive CVs Demystifying of CV formats and styles, including 'hybrid', competency-based and functional CVs Drawing on over 25 years' experience of training recruiters, John Lees, author of the bestselling How To Get A Job You'll Love, is one of the UK's best known career strategists. In Knockout CV he shows you how to write CVs and cover letters that convey your strengths quickly and get you into the interview room. "A comprehensive and practical guide to building arelevant, evidence-based CV which will win the recruiter'sattention. Looks afresh at the role of your CV, the pitfalls to avoid and shares invaluable recruiter insights." Liz Mason, Associate Director, Alumni Career Services,London Business School, UK"You write a CV for a purpose: to get a job. Knockout CV works backwards from the desired result, analysing each feature of the CV from the perspective of impact on the decision-maker. No frills, no diversions, simply full of practical help." Shirley Anderson, HR Director, Talent and Reward, Pilkington Group Limited"This book is essential reading for anyone considering a career move or applying for another position. First impressions are so important and your CV really does have to stand out from all the rest. This is an excellent, practical guide which I believe will really make the difference to securing that interview." Christine Gaskell, Chair, Cheshire and Warrington Local Enterprise Partnership and former HR Director, Bentley Motors Ltd"John Lees leads you back to the basic document of so manyjob-hunting campaigns, and yet again opens your eyes to seethe real underlying principles. His clear and authoritative voice brings life back into what is often seen as a routine activity - CV writing - yet is so important in today's hyper-competitive job market. With his clear chapter objectives, insightful exercises (especially the 'CV data bank'), professional insights,and a healthy dose of humour, John Lees sets the standardfor modern CV writing." Matthias Feist, Head of Careers & Business Relations atRegent's University London, UK and Chair of PlaceNet: Placements in Industry Network"John has produced an honest and authentic approach to creating a winning CV which speaks to your strengths, and will make the difference to getting noticed and in front of the selection panel. Yes, you can expect to work some, however John's advice plus your investment in time will produce a great result with the critical bonus of mental and emotional clarity over your next (right) career move." Angella Clarke-Jervoise, Big 4 Partner Recruiter andInternational Career CoachPraise for John Lees' careers books:"When I read John's writing, two things happen. First, I feel as if he's standing right there, personally advising me. And second, I always come away thinking over the issue in a new way. It's a rare, but very useful, gift." Sarah Green, Associate Editor, Harvard Business Review"I know first-hand the joy that being in the right career can bring and I commend John Lees for his books and seminars which help other people do just that." Rosemary Conley CBE"John Lees is the Career Professional's professional; thedoyen of careers experts. His books and advice have helpedcountless numbers of people to enjoy better, more fulfilling careers." Dr Harry Freedman, Career and Business Strategist,Hanover Executive

John Lees has been involved in the training and developing of recruitment specialists since the mid 1980s, from both public and private sectors. He undertook an advisory role to the RN careers service, and has provided help for Army personnel beginning civilian careers. He was Chief Executive of the Institute of Employment Consultants (IEC) until 1993 when he left to become a Director of TGA, an employment research and careers advisory company. In 1999 he decided to go it alone and now runs his own human resources consultancy, specialising in career management and developing new tools to help with difficult career change decisions. John writes and speaks widely, and amongst his regular commitments acts as an online careers guru for lifebyte.com. John is a Fellow of the Chartered Institute of Personnel & Development (FCIPD) and Fellow of the Recruitment & Employment Confederation (FREC).