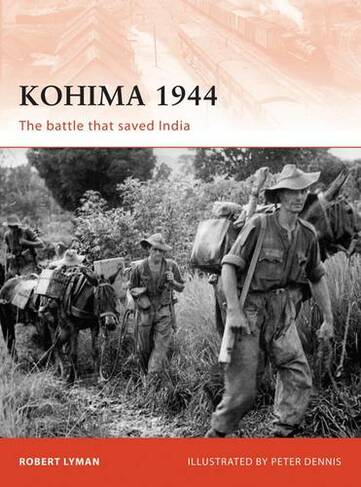 In March 1944, the Japanese Army launched Operation U-Go, an attack on Assam in India intended to inspire a rising against British rule. A month earlier the Japanese had launched Operation Ha-Go, which was intended as a feint to draw British attention away from the Imphal area. But British forces employed new defensive techniques to counter the Japanese infiltration tactics. These tactics were again employed on a larger scale when Imphal and Kohima were surrounded during Operation U-Go. Kohima took place in two stages. From 3 to 16 April, the Japanese attempted to capture Kohima Ridge. As the small garrison held out against fierce and repeatedly desperate attempts by the Japanese 31st Division to destroy them, so the British 2nd Division fought to break through and relieve them. Then for over two months British and Indian troops counter-attacked to drive the Japanese from the positions they had already captured. The battle ended on June 22 when British and Indian troops from Kohima and Imphal met at Milestone 109, thus ending the siege. Illustrations (chiefly col.)

Robert Lyman is the author of one Campaign Series titles: Iraq 1941 (2006). He has also written Slim, Master of War (Constable, 2004), First Victory (Constable, 2006) and The Generals: From Defeat to Victory in Asia, 1941-45 (Constable, 2008), the later of which deals in detail with the man responsible for the Japanese invasion of India in 1944, Mutaguchi Renya. Robert's latest book, The Longest Siege, Tobruk. The Battle that Saved North Africa (Macmillan) is being published simultaneously in Australia and the UK on 15 May 2009. He is also writing, for Macmillan, a substantial account of the war in the Far East to be called The Turning Point: Imphal and Kohima and the Battle for India (forthcoming, 2010). Robert is also the Secretary (soon to be Chairman) of the Kohima Educational Trust (www.kohimaeducationaltrust) and a trustee of the Burma Campaign Memorial Library at SOAS, London.