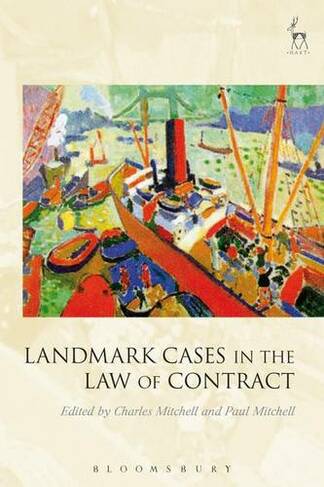 Landmark Cases in the Law of Contract

Landmark Cases in the Law of Contract offers twelve original essays by leading contract scholars. As with the essays in the companion volume, Landmark Cases in the Law of Restitution (Hart, 2006) each essay takes as its focus a particular leading case, and analyses that case in its historical or theoretical context. The cases range from the early eighteenth- to the late twentieth-centuries, and deal with an array of contractual doctrines. Some of the essays call for their case to be stripped of its landmark status, whilst others argue that it has more to offer than we have previously appreciated. The particular historical context of these landmark cases, as revealed by the authors, often shows that our current assumptions about the case and what it stands for are either mistaken, or require radical modification. The book also explores several common themes which are fundamental to the development of the law of contract: for instance, the influence of commercial expectations, appeals to 'reason' and the significance of particular judicial ideologies and techniques. black & white illustrations

Charles Mitchell is a Professor of Law at King's College London. He writes widely on the law of trusts and the law of obligations, and his recent publications include Underhill and Hayton's Law Relating to Trusts and Trustees (17th edn, 2006) (co-authored with David Hayton and Paul Matthews) and Subrogation: Law and Practice (2007) (co-authored with Stephen Watterson). Paul Mitchell is a Reader in Law at King's College London and the author of The Making of the Modern Law of Defamation (Hart, 2005). Together they co-edited Landmark Cases in the Law of Restitution (Hart, 2006).