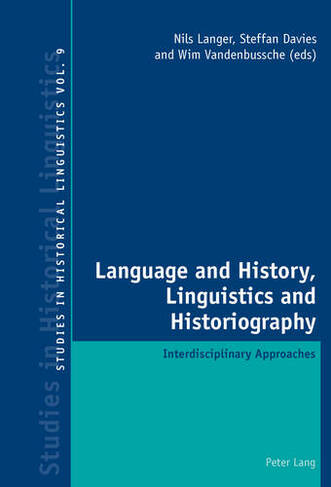 What are the points of contact between the study of language and the study of history? What are the possibilities for collaboration between linguists and historians, and what prevents it? This volume, the proceedings of an international conference held at the University of Bristol in April 2009, presents twenty-two articles by linguists and historians, exploring the relationship between the fields theoretically, conceptually and in practice. Contributions focus on a variety of European and American languages, in historical periods from the Middle Ages to the present day. Key themes at the intersection of these two disciplines are the standardization and classification of languages, the social and demographic history of medieval and early modern Europe, the study of language and history `from below', and the function of language in modern politics. The value of interdisciplinary collaboration is demonstrated in a wide-ranging set of case studies, on topics including language contact in Northern and Central Europe, the relationship between peninsular and transatlantic Spanish, and new approaches to the recent histories of Nicaragua, Luxembourg and Bulgaria. The volume seeks out the interdependencies between the two fields and asks why exchanges between linguists and historians remain the exception rather than the rule.

Nils Langer is Reader in German Linguistics at the University of Bristol. His primary research interests lie in the area of historical sociolinguistics and he is currently working on language contact in Schleswig-Holstein in the nineteenth century. Steffan Davies is Lecturer in German at the University of Bristol. He studied History and German at the University of Oxford, writing his doctoral thesis on the literary, cultural and historiographical treatment of Albrecht von Wallenstein in the `long nineteenth century'. Wim Vandenbussche is Professor of Dutch Linguistics at the Vrije Universiteit Brussel. He teaches courses on Dutch and Germanic language history, as well as on various aspects of sociolinguistics. His research is situated in the domain of historical sociolinguistics, with particular attention to the language situation in Flanders during the eighteenth and nineteenth centuries.