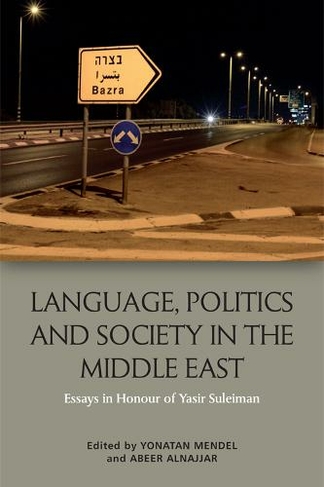 Language, Politics and Society in the Middle East Essays in Honour of Yasir Suleiman

Published in honour of Professor Yasir Suleiman, this collection acknowledges his contribution to the field of language and society in general, and to that of language analysis of socio-political realities in the Middle East in particular. Presenting a range of case studies relating to the role of language in the Middle East, each shows that the study of language unearths deeper processes relating to political affiliations, social behaviour and transnational as well as religious and sectarian identities. It also explores questions related to the power of language as a socio-political instrument, and addresses current issues that facilitate an understanding of the evolving intersections in the areas of language and politics in the modern Middle East. This includes how language forms and is shaped by its social and political surroundings, the language manifestations of social, religious and political identifications, as well as groupings, divisions and polarisations in the encounter between language, conflict and politics in contemporary Middle Eastern communities. Looking at language as a proxy for social and political struggles, the volume gives prominence to the long-lasting legacy and great contribution of Professor Yasir Suleiman to the field. 4 B/W tables 2 B/W line art

Yonatan Mendel is a Research Associate at the Centre of Islamic Studies at the University of Cambridge. He is author of The Creation of Israeli Arabic: Security and Political Considerations in the Study of Arabic in Jewish-Israeli Schools (2014) and co-author (with Ronald Ranta) of From the Arab Other to the Israeli Self: Palestinian Culture in the Making of Israeli National Identity (2016). Abeer AlNajjar is a Visiting Senior Fellow at the Middle East Center at London School of Economics, and an Associate Professor of Mass Communications at the American University of Sharjah-UAE. She is author of Conflict over Jerusalem: Covering the Palestinian-Israeli Conflict in the British Press (2009).