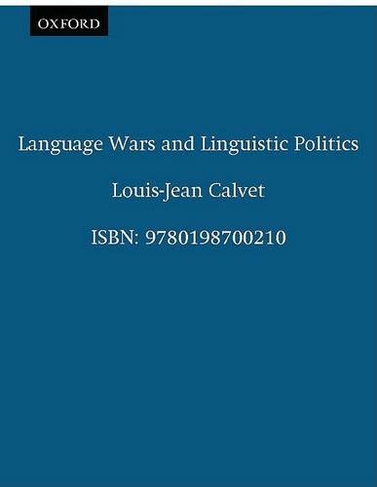 Non-linguistic conflicts - economic, religious, territorial - are often projected on to language differences, and may be played out in the language policies of governments and other holders of power. Jean-Louis Calvet deals broadly, in a non-technical and introductory style, with this interaction of language issues and political process. He examines the fundamental problems arising from language contact, multilingualism, and the conflicts caused by inequalities symbolized in various patterns of language use. The author draws extensively on his own research and uses numerous case studies to illustrate the power-political dimensions of language policies from many parts of the world, such as Africa, China, South America, the former Soviet Union, and Europe. He cites the former Soviet Union as a prime example of an attempt to impose, for ideological reasons, a supra-national vehicular language, in order to supersede the languages of regional nationalism. Professor Calvet offers no simple solutions to the `war of languages' but urges all those involved in language intervention - from the professional `language planners' to school teachers - to combine the need to promote majority languages with respect for the diversity of local languages and language varieties. 2 line figures